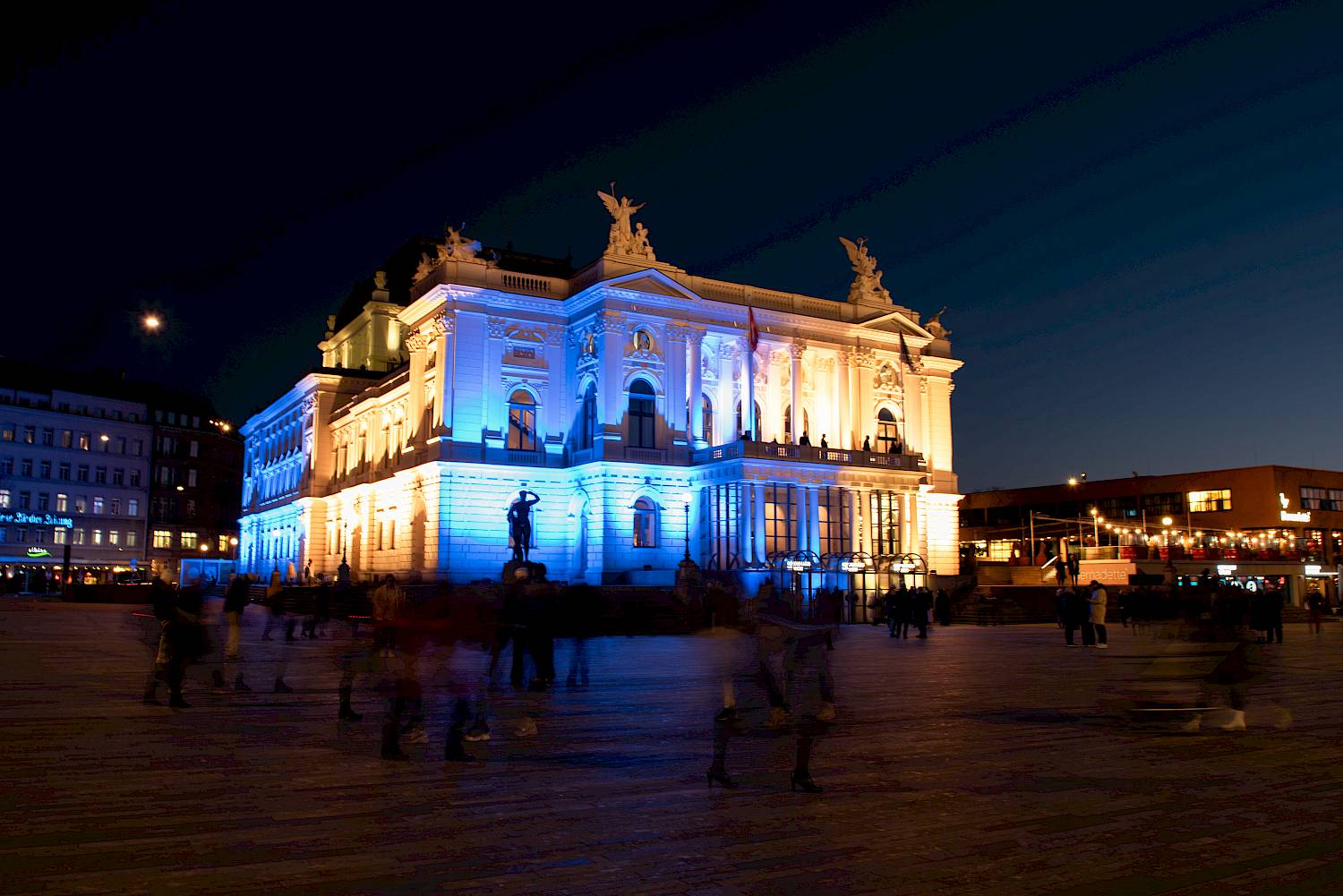 This past Thursday, Vladimir Putin began a military assault on Ukraine. We fiercely condemn this violation of international law and act of inhumane aggression. Beginning this past Saturday, the façade of the Opernhaus has been illuminated in the colors of Ukraine each night as a sign of our solidarity with Ukraine, and as a signal of our opposition. During the final curtain call after performances, singers carry the Ukrainian national flag. We are in regular communication with the 40-some employees of the Opernhaus who are from Ukraine or Russia regarding the personal impact on them and their families, and include them in discussions regarding further actions and activities at the Opernhaus.

On the day after Putin’s invasion, we received the first demands to immediately cancel Russian soprano Anna Netrebko’s two planned appearances, set to take place at the end of March, to send a signal to the Kremlin. There were demands that her appearances only be allowed to take place should she immediately distance herself from Russia and Putin. We found in particular the time pressure of these calls to be unfair, and have deliberately given Anna Netrebko time and space to reflect on the situation, and to determine and articulate her own position to the events. In retrospect, we are still of the opinion that this course of action was correct, as such an approach maintains a standard of respectful interaction with the house’s artists. It is important to me to underline that this course of action has nothing to do with expected ticket revenues.

On Saturday evening, Anna Netrebko released a statement in which she explicitly condemned the war in Ukraine, and expressed her compassion for the individuals in the war zone. We see this statement as a positive development, and take note that she cannot distance herself further from Vladimir Putin. As a matter of principle, we do not consider it appropriate to judge the decisions and actions of citizens of repressive regimes based on the perspective of those living in a Western European democracy.

At the same time, we are forced to recognize that our decisive condemnation of Vladimir Putin and his actions is not compatible with Anna Netrebko’s public position. She came to the conclusion that, in light of the current situation, she would prefer not to sing the performances in Zurich, with following statement: «This is not a time for me to make music and perform. I have therefore decided to take a step back from performing for the time being. It is an extremely difficult decision for me, but I know that my audience will understand and respect this decision.»

The role of Lady Macbeth will now be sung by Veronika Dzhioeva in the performances on 26 and 29 March. Tickets holders for these performances will be contacted directly. The price difference between E-price sand Gala prices will be refunded to our customers.

For almost a week now, the Opernhaus has been illuminated every evening in the colors of Ukraine. However, it is our wish to go beyond the symbolic - together with you! Therefore, on Friday, March 11, we invite you to a
Fundraising Concert