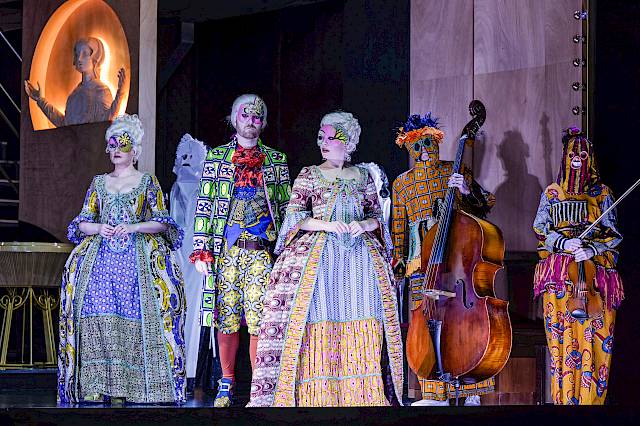 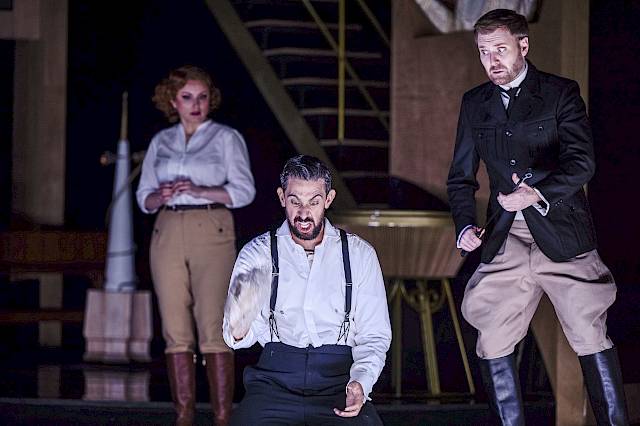 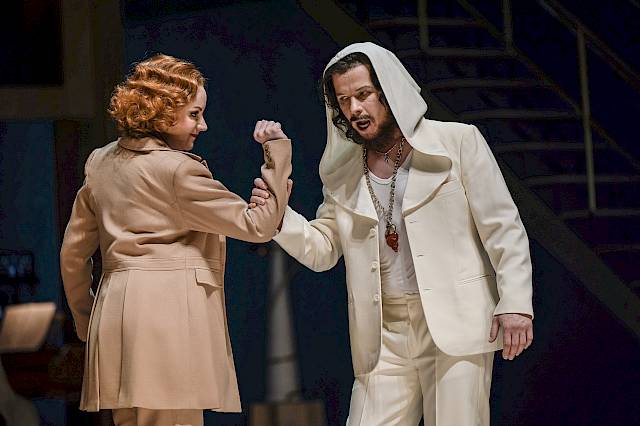 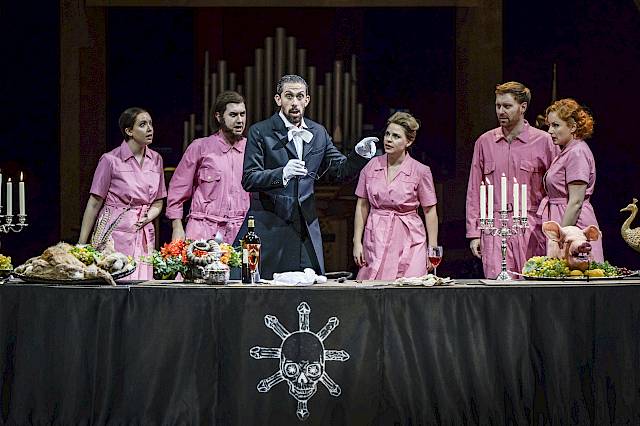 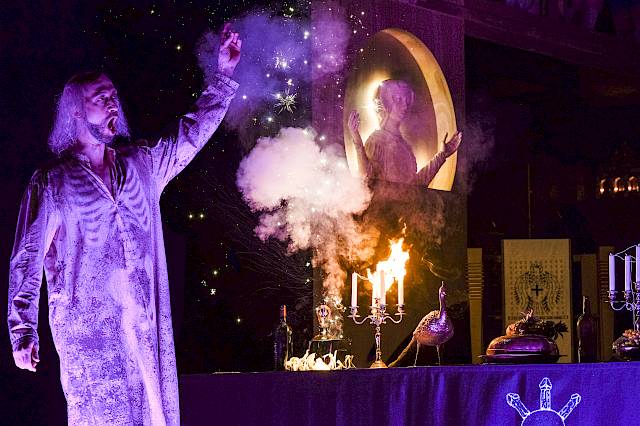 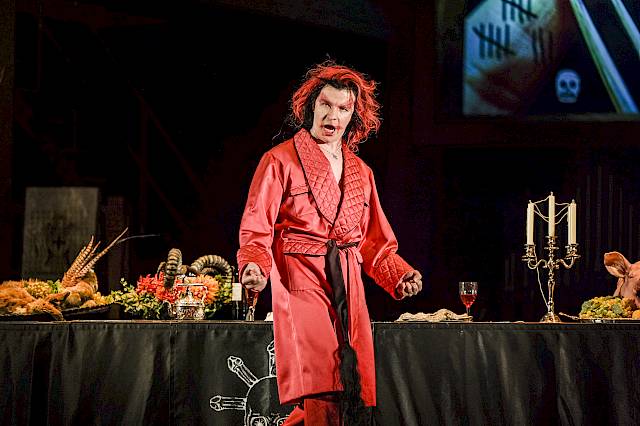 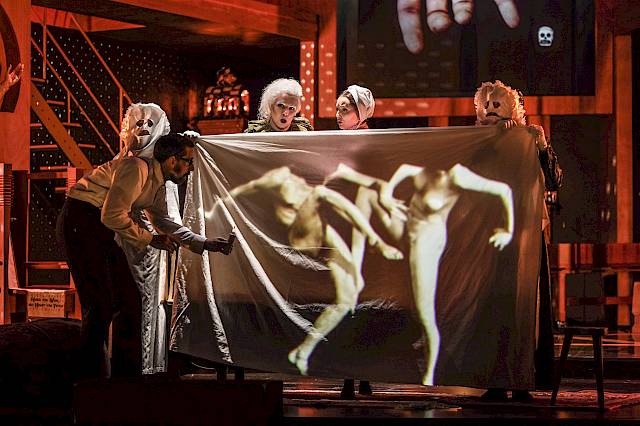 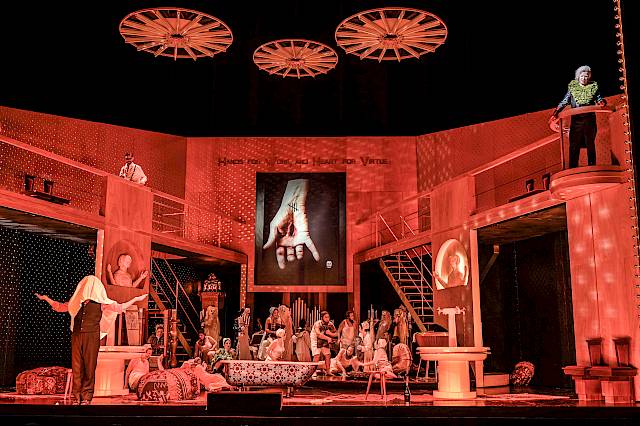 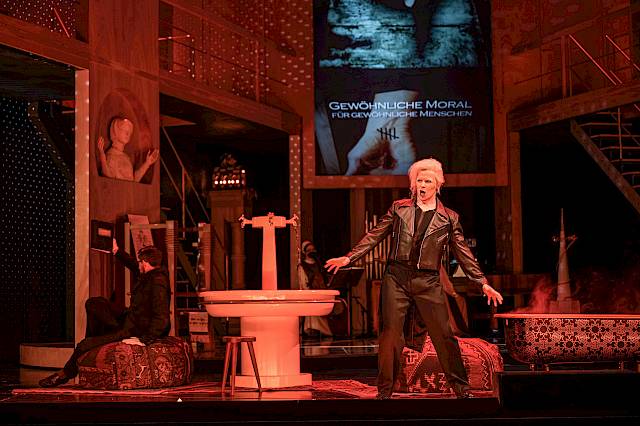 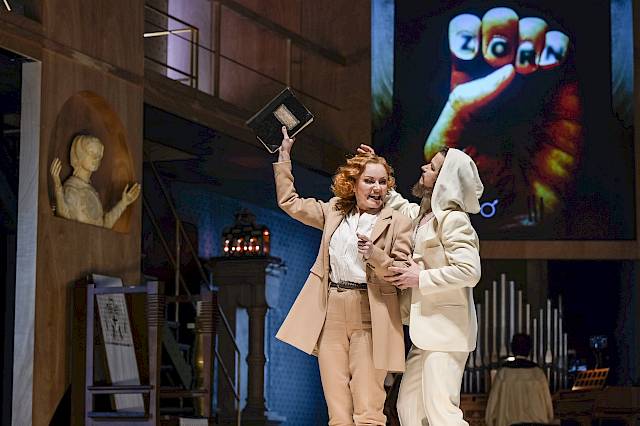 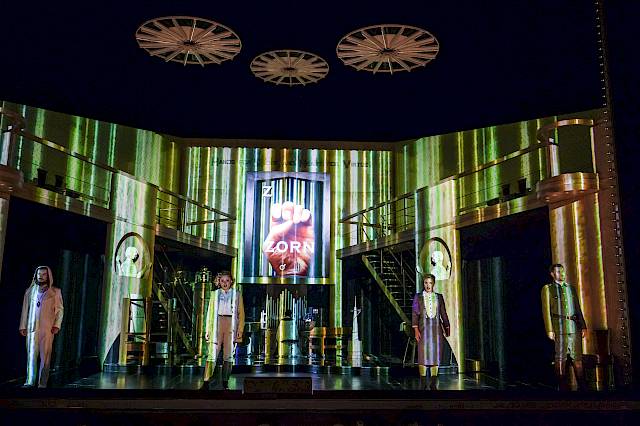 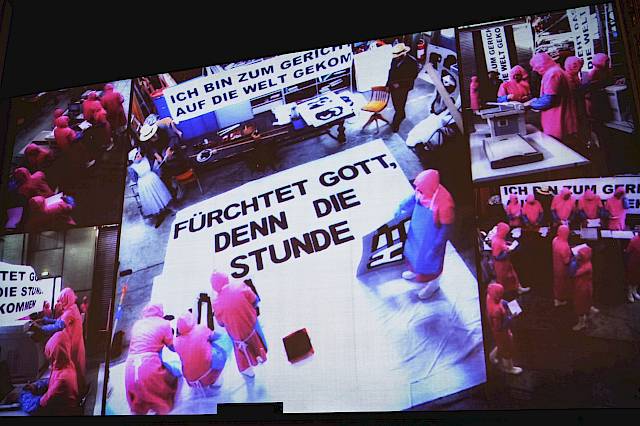 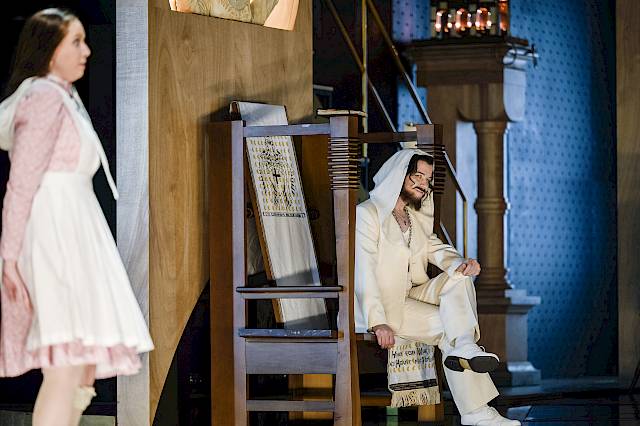 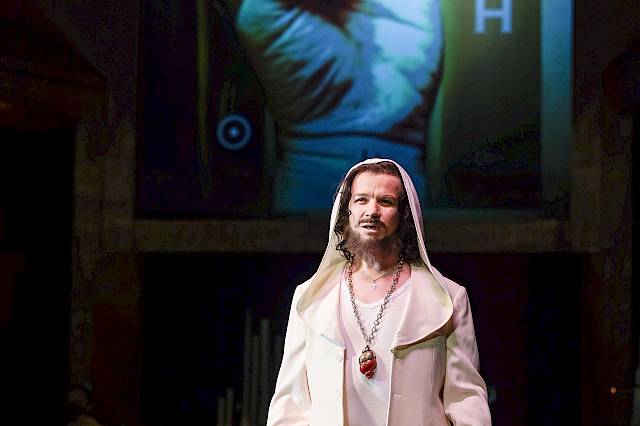 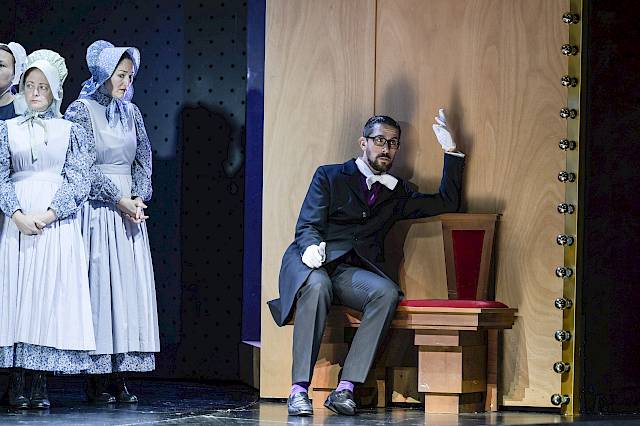 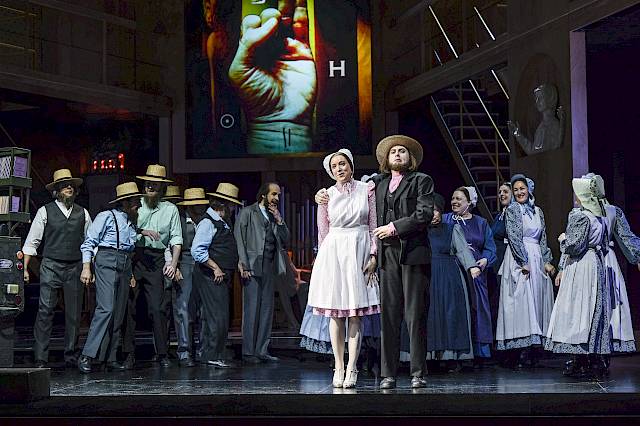 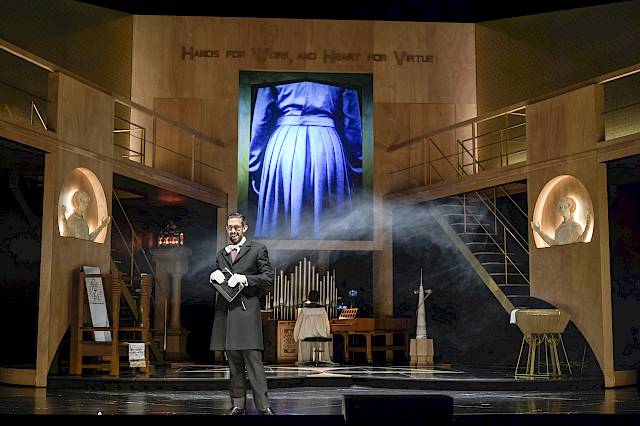 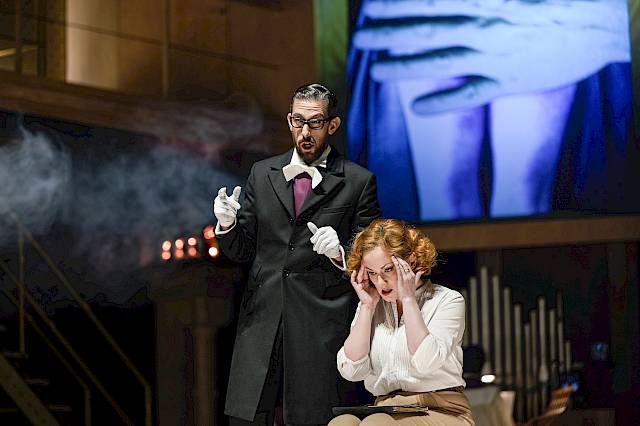 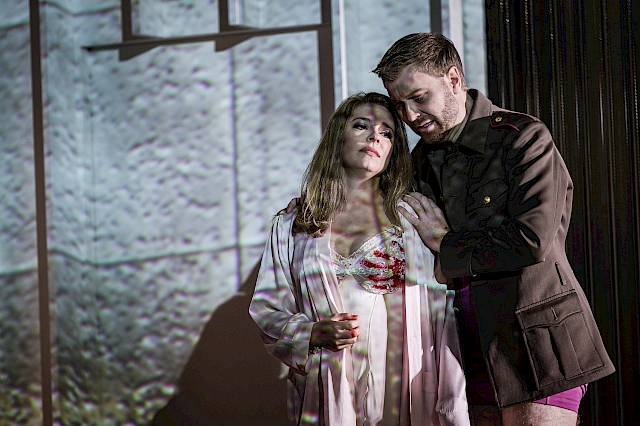 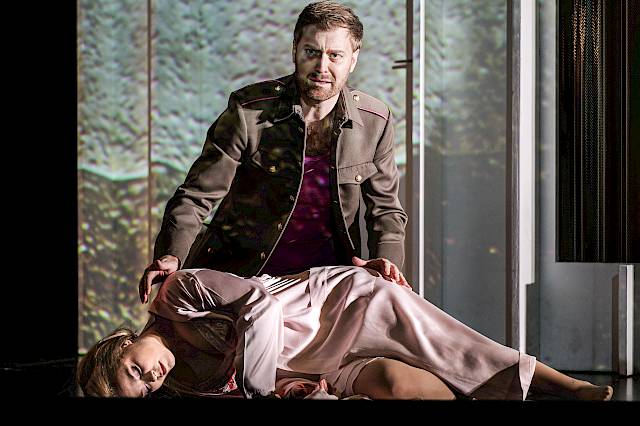 Act One
Don Giovanni has broken into the Commendatore’s house in order to seduce Donna Anna in her bedroom. His servant Leporello is keeping watch. Donna Anna calls for help, and Don Giovanni kills her father.

Donna Anna forces her betrothed, Don Ottavio, to swear vengeance for the murder.

Don Giovanni tries his luck with a beautiful stranger, who turns out to be all too familiar: it is Donna Elvira, whom he seduced in Burgos. She has followed him. Leporello shows her the catalogue of Don Giovanni’s amorous conquests.

Zerlina and Masetto are celebrating with friends on the eve of their wedding. Don Giovanni takes a shine to the peasant girl. In order to rid himself of the bridegroom, he sends Leporello, together with the peasants, to his palace, where he entertains them with coffee and chocolate as well as other delicacies and attractions. Don Giovanni promises to marry Zerlina, but does not attain his objective, for Donna Elvira intervenes, warns Zerlina against the seducer and takes her away with her.

Donna Anna intends to ask for Don Giovanni’s help in solving the murder, but Donna Elvira interrupts the conversation and warns her against the seducer. Only with difficulty does Don Giovanni manage to escape the awkward situation, but he has already given himself away: Donna Anna has recognised the man who assaulted her in her room. She recounts her version of the incident to Don Ottavio and demands that he take revenge on the villain. Don Ottavio cannot believe that Don Giovanni would be capable of committing such a deed, and decides to seek further evidence.

Leporello reports that Donna Elvira has taken Zerlina to the palace. Don Giovanni orders a great feast, during the course of which he intends to complete the seduction of the beautiful peasant girl.

Zerlina convinces her bridegroom that nothing has happened between herself and Don Giovanni. The feast begins, and three masked guests arrive: Donna Anna, Donna Elvira and Don Ottavio, who are looking for an opportunity to punish Don Giovanni. He falls into their clutches by taking Zerlina into an adjoining room. When she cries for help, Don Giovanni tries in vain to extract himself from his predicament by laying the blame on Leporello. However, Donna Anna, Donna Elvira and Don Ottavio are not deceived and take the murderer to task. Don Ottavio draws his pistol, but cannot bring himself to pull the trigger. In the general confusion, Don Giovanni and Leporello manage to flee.

Act Two
Don Giovanni is now interested in Donna Elvira’s maid. In order to deceive the girl with regard to his social status, he changes clothes with Leporello.

In disguise, Leporello lures Donna Elvira out of the house by pretending to be a repentant Don Giovanni. They disappear into the darkness of the night.

Don Giovanni sings the chambermaid a serenade. However, it is not she who appears, but Masetto, who is on  his way to take revenge against the seducer of his bride. The encounter with the putative Leporello has unfortunate results. Zerlina finds her wounded bridegroom, upbraids him for his jealousy, and comforts him in her own way.

Leporello has fled with Donna Elvira to a dark vestibule in order not to be recognised. He is just about to make a run for it when he is joined by Donna Anna and Ottavio, and a little later by Zerlina and Masetto. They believe that Don Giovanni is in their power and are about to kill him. At the last minute, Leporello reveals his true identity and uses the general confusion as an opportunity to escape.

Don Ottavio is now convinced that Don Giovanni is the murderer. He goes to press charges.

On the run from his pursuers, Don Giovanni has ended up in a graveyard. Here he tells Leporello about another failed amorous exploit with a girl who transpired to be one of Leporello’s lovers. A sinister voice threatens the miscreant with imminent retribution. It comes from the tomb of Donna Anna’s father. Giovanni invites the statue to dinner.

Don Ottavio asks Donna Anna to go ahead with their wedding ceremony, which has so long been postponed, the following day. She refuses his request.

Alone in his palace, Don Giovanni is holding a nocturnal banquet. Donna Elvira undertakes a last attempt to persuade him to mend his ways. The guest from the next world appears and invites Don Giovanni to repent for his crimes. The latter refuses and is swallowed up by a firestorm.

Donna Anna, Donna Elvira, Don Ottavio, Zerlina and Masetto enter and learn that a higher power has already brought the culprit to justice. They devote themselves to their future: Donna Anna puts off Don Ottavio for another year, Donna Elvira intends to spend the rest of her life in a convent, Leporello will look for a new master, while Zerlina and Masetto go home for supper.