In Italian with German and English surtitles. Duration 2 H. 30 Min. incl. intermission after 1st part after approx. 1 H. Introduction 45 min before the performance. 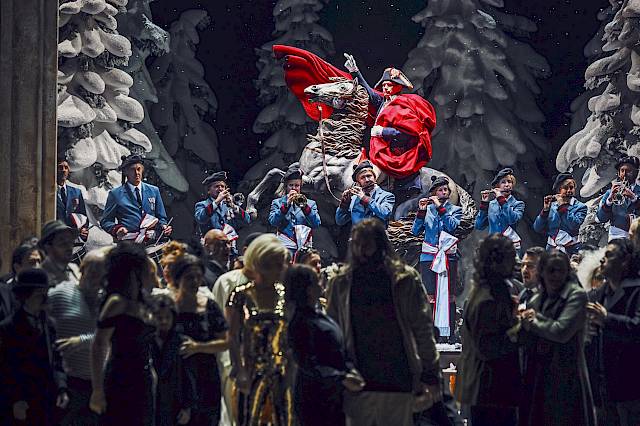 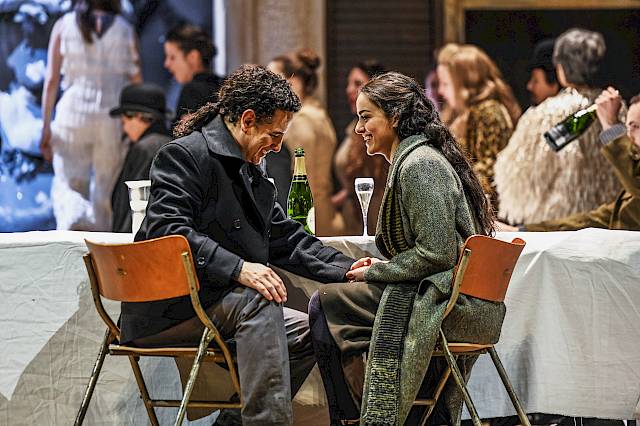 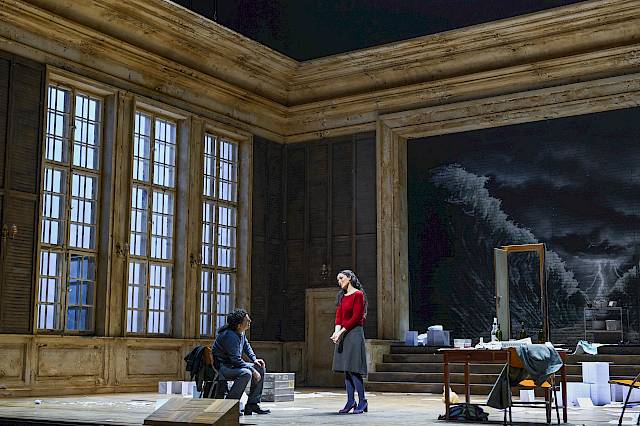 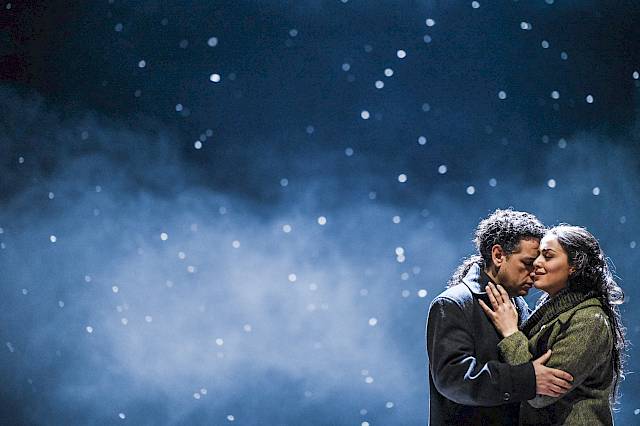 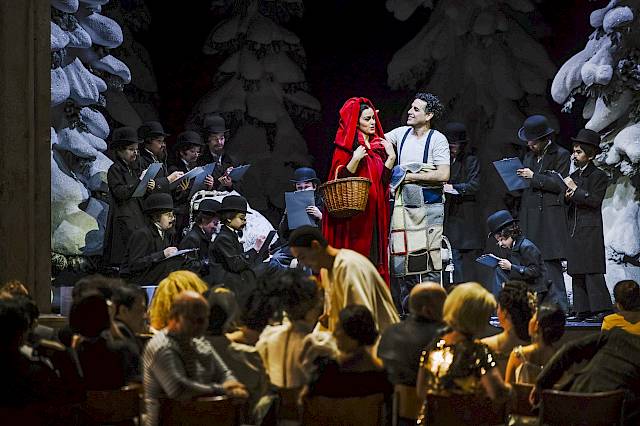 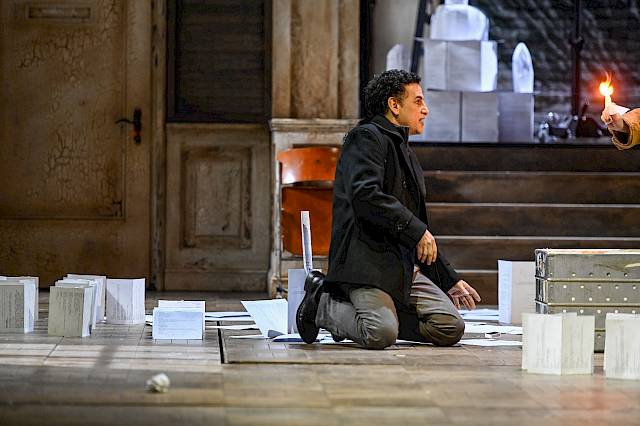 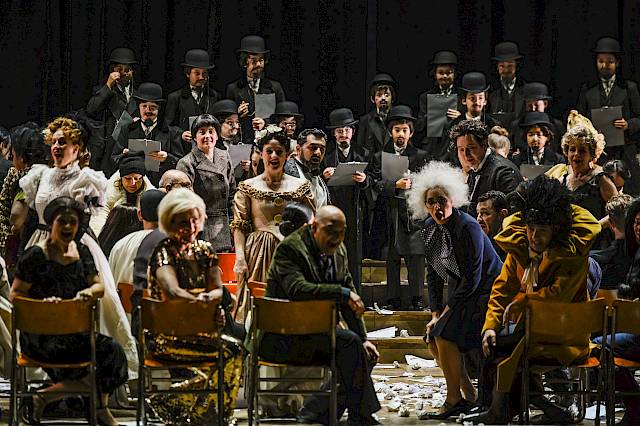 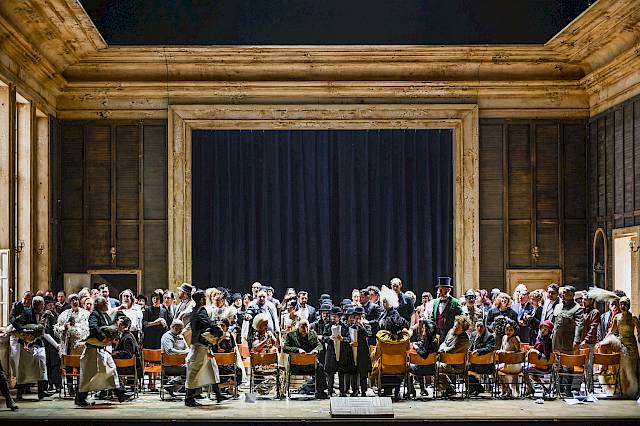 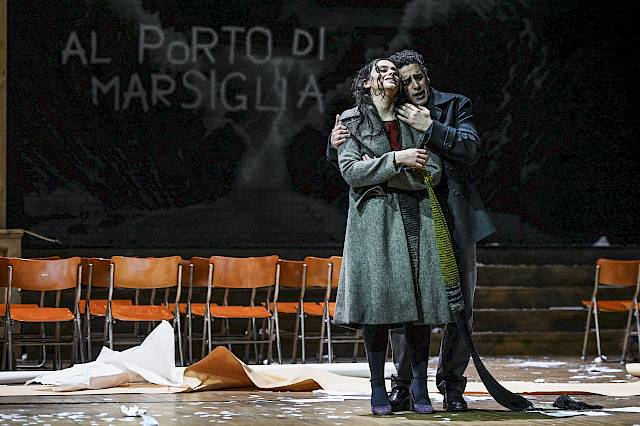 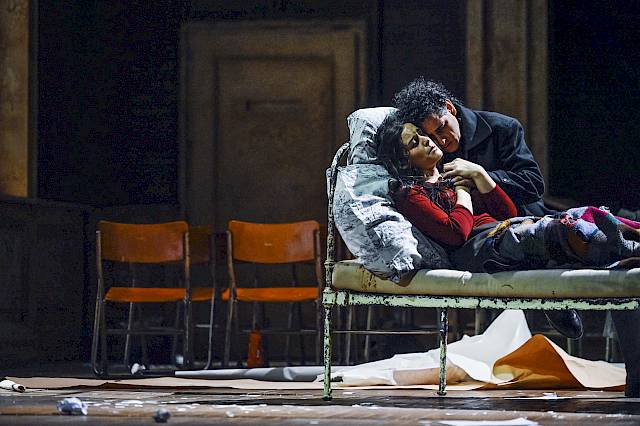 Scene One
Rodolfo, a writer, and Marcello, a painter, are trying to work. It is cold and they are hungry, as their art scarcely enables them to make a living. In order to heat the room, Rodolfo sacrifices the manuscript of his drama. Colline, the philosopher, joins them. It is Christmas Eve, and the books he wanted to take to the pawnbroker’s have been refused. The musician Schaunard, on the other hand, has earned a little money with a quirky musical commission, and brings firewood, food and wine. The landlord Benoît surprises the four Bohemians and demands the rent. The friends give him something to drink and quiz him about his affairs. When it transpires that he has been unfaithful to his wife, they feign indignation and throw him out. They decide to spend Christmas Eve out on the town. Only Rodolfo wants to work a little longer. Once he is alone, somebody knocks at the door. His neighbour asks him to relight her candle. She seems exhausted and sickly. When she drops her key, as if by chance, Rodolfo’s candle also goes out. As they search for the key, their hands touch. The pair come closer and fall in love.

Scene Two
Christmas Eve in Paris. Amid a cheerfully bustling crowd, Schaunard is haggling over an out-of-tune horn. Colline buys a rare book and a coat. Rodolfo gives Mimì a bonnet, while Marcello flirts with pretty girls. Rodolfo introduces his new love, Mimì, to his friends in front of the Café Momus. As they are sitting down to dinner, Marcello’s girlfriend Musetta arrives in the company of Alcindoro, an older, wealthy admirer. She recognises Marcello and finds a pretext to send Alcindoro away. Musetta and Marcello fall into one another’s arms. The Bohemians join the throng, and when Alcindoro returns, all he finds is the bill they have left behind.

Scene Three
Two months later, early on a cold winter’s morning. Mimì seeks Marcello out and asks his advice: Rodolfo’s jealousy is making him unbearable to live with. Marcello advises her to leave him. Rodolfo, who has fallen asleep in the next room, wakes up. Mimì stays in the background. Rodolfo also admits to Marcello that he wants to leave his lover – however, not only because he is jealous, but also because of her incurable illness. Mimì gives herself away when she has a coughing fit. Overwhelmed by their feelings, Mimì and Rodolfo decide to stay together until the spring. In the meantime, a tempestuously jealous scene erupts between Marcello and Musetta.

Scene Four
A few months later. Rodolfo and Marcello are pretending to work. Secretly, they are thinking of the happy times they spent with Mimì and Musetta. Colline and Schaunard arrive, bringing dry bread and a herring with them. The four Bohemians fool about, becoming increasingly boisterous and acting out a duel. Just when they are at their most high-spirited, Musetta bursts in, followed by Mimì – who is mortally ill. The Bohemians make up a bed for her. Musetta sacrifices her earrings so that Marcello can buy medicine. Musetta wants to buy a muff to warm Mimì’s cold hands. Colline follows her example and goes off to sell his coat. Schaunard leaves the reunited lovers alone. Mimì and Rodolfo remember the times they shared. When the friends return and announce the imminent arrival of a doctor, Mimì falls asleep. Lost in thought, only his friends’ uneasy silence makes Rodolfo realise that Mimì has died.