In Italian with German and English surtitles. Duration approx. 3 H. incl. intermission after approx. 1 H. 15 Min. Introduction 45 min before the performance.
A production of the Salzburg Festival. 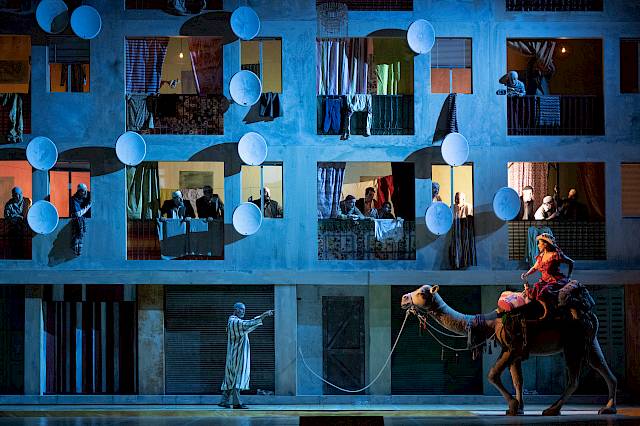 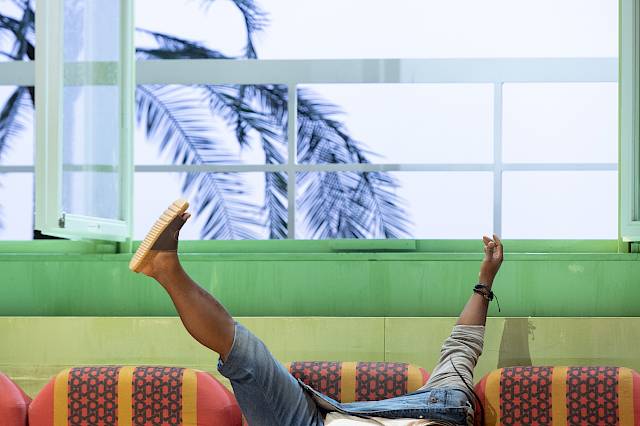 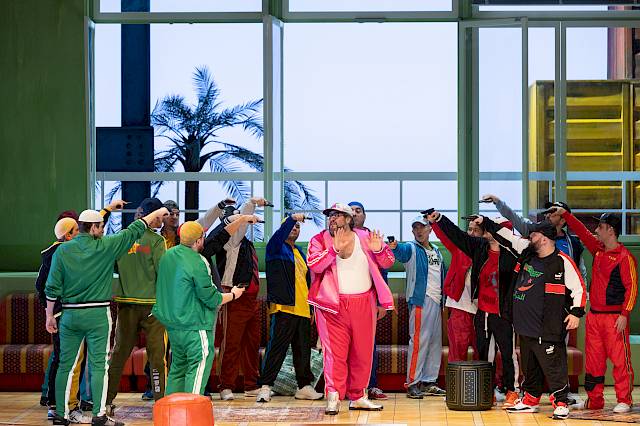 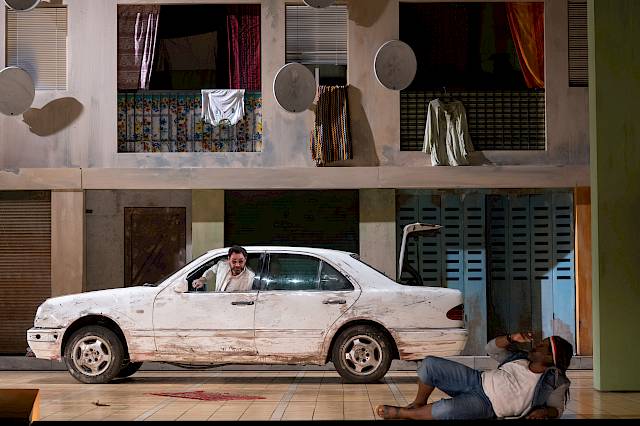 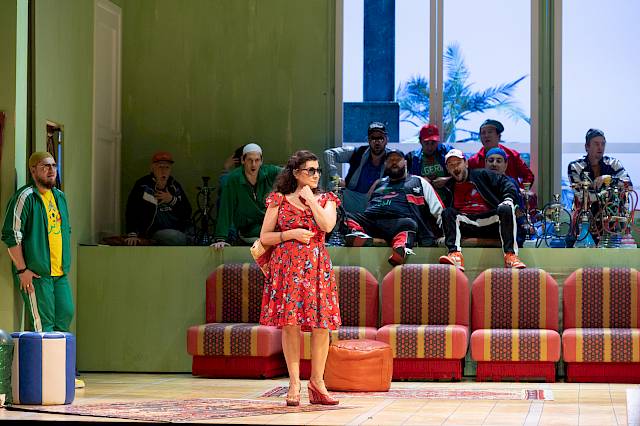 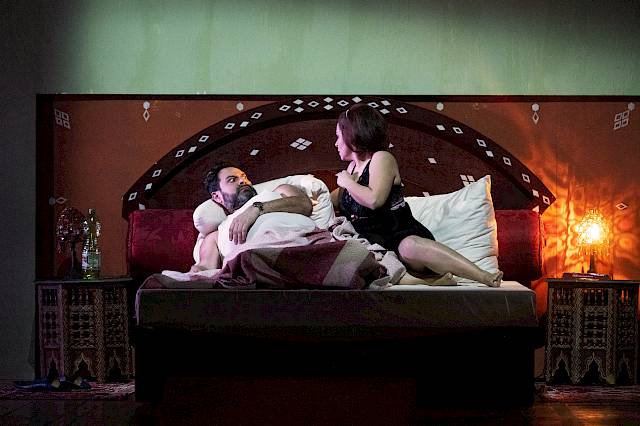 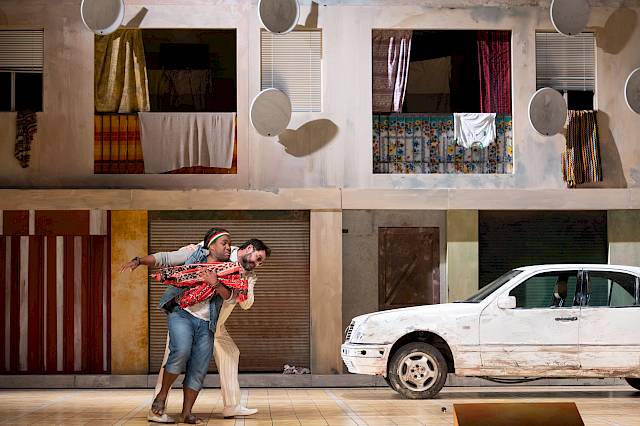 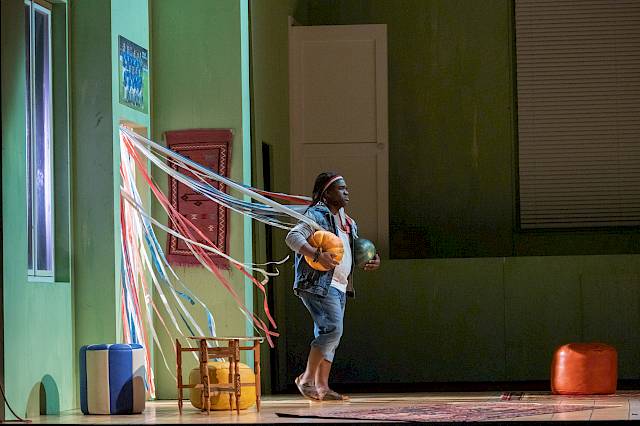 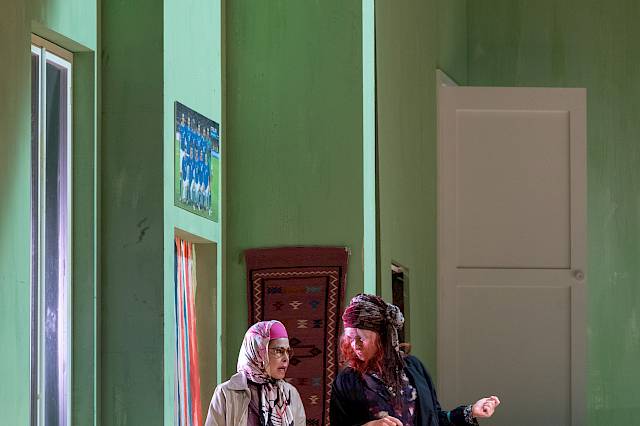 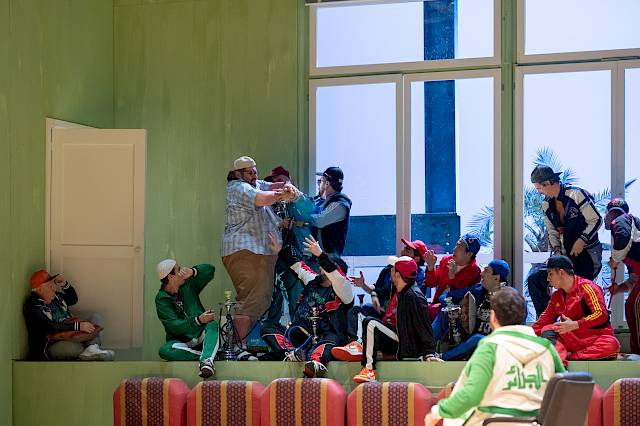 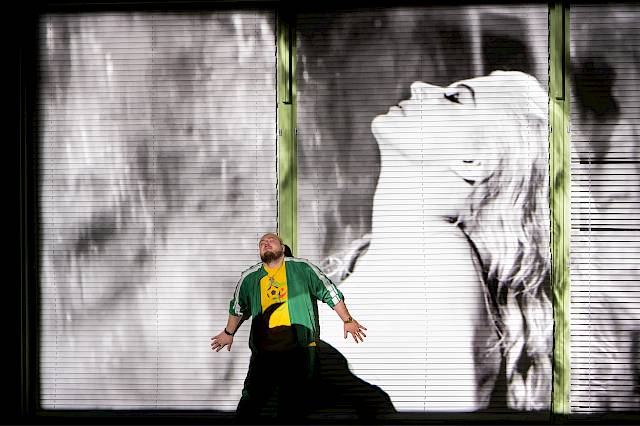 Act one
Mustafà has lost interest in his wife Elvira. She is desperate, but her friend Zulma advises her to put up with her husband’s dismissive behaviour and not to resist for the moment. When Elvira approaches him with another attempt to win back his favour, Mustafà reacts even more aggressively.
Mustafà informs Haly, who renders services to his boss in dubious affairs, that he wants to get rid of Elvira; to this end, he is intending to make her the wife of his favourite slave, the Italian Lindoro. As he is no longer attracted by the all too subservient women around him, he orders Haly to find him a good-looking Italian girl within six days.
Lindoro, who has now been a slave in Algiers for three months, thinks longingly of his sweetheart back at home. Mustafà surprises him with the news that he has a wife in store for him. Lindoro tries to evade this gift by enumerating the many qualities that his wife will have to possess.
The passengers on an Italian ship that has been wrecked in a storm fall into the hands of Haly and his men. Isabella is one of those taken captive. She bewails the misfortune she has brought upon herself by deciding to head off in search of her beloved Lindoro. However, she takes courage when she notices how greatly she is attracting the attention of the men around her. She knows that in the pres­ent situation she will be able to put her female charms to good strategic effect.
Taddeo, Isabella’s companion and admirer, is apprehended by Haly and his armed men. When it turns out that the two prisoners, who pretend to be uncle and niece, are from Italy, Haly promises Isabella a place of honour in Mustafa’s ‘seraglio’. Isabella seems unperturbed at this, sending the jealous Taddeo into a rage. He turns the subject of conversation to Lindoro, whom, although he does not know him personally, he suspects — in spite of Isabella’s protestations — to be his rival. Isabella and Taddeo get into a furious argument but soon make up; fully aware of the dangers they face, they decide to stay together.
Mustafà gives Lindoro permission to return home to Italy, but only on the con­dition that he takes Elvira with him. At the prospect of freedom and of returning to his homeland, Lindoro accepts the offer. Elvira, on the other hand, wants to stay with Mustafà, who rebuffs her harshly. Haly appears and reports that he has captured an exceptionally attractive Italian woman. Mustafà revels in anticipation of their first meeting. He orders his wife to depart with Lindoro and Zulma straightaway.
Mustafà’s men praise him for his power over women. When Isabella is brought in, Mustafà is ravished at the sight of her. She immediately realizes the effect she is having and flatters him, pretending to be in need of consolation. Taddeo bursts in and demands to stay at Isabella’s side. Mustafà condemns him to death but immediately revokes the sentence as a favour to Isabella.
Elvira, Zulma and Lindoro enter in order to say farewell to Mustafà. Quite unexpectedly, Isabella and Lindoro find themselves face to face. Unable to conceal their inner agitation, they confuse the others with their behaviour. Isabella is enraged when she finds out that Mustafà is sending his wife away on her account and that Elvira is to marry Lindoro. She commands Mustafà to keep his wife and to let her, Isabella, take over the emancipated Italian as her slave — otherwise Mustafà will forfeit her favour. Soon, nobody is capable of bringing the situation under control.

Act two
The people around Mustafà are astounded and amused to see how, in his passion for Isabella, he fails to see that she is playing a game with him.
Mustafà sends Elvira and Zulma to Isabella to tell her that he will shortly be visiting her for coffee. He thinks that Lindoro is on his side and is intending to win Taddeo over too.
Lindoro and Isabella have a short time to themselves and he is able to dispel her doubts about his fidelity. They arrange a secret meeting in order to work out how to escape. Lindoro is euphoric at his happiness in love.
With Haly hot on his heels, Taddeo pleads for mercy from Mustafà, who re­assures him that he has no need to worry: as a sign of the high regard he has for Isabella, he is giving her ‘uncle’ the rank of a Kaimakan. Although Taddeo is far from pleased at this, Mustafà’s men sing the new office-holder’s praises. Faced with either making himself Mustafà’s slave or risking death, all Taddeo can do is accept.
Isabella is looking forward to Mustafà’s visit. She orders her ‘slave’ Lindoro to prepare coffee for at least three persons, which Elvira and Zulma find disquieting. When they point out that Mustafà has a meeting à deux in mind, Isabella criticizes them for being too submissive; she announces that she is going to show them how to handle men and sends them into the adjacent room. Knowing that Mustafà, Lindoro and Taddeo are secretly watching her, she treats them to a full display of all her charms.
Mustafà cannot wait to see Isabella and orders Lindoro to fetch her. Taddeo is instructed to leave the room when Mustafà sneezes. Isabella enters and Mustafà presents his newly appointed Kaimakan Taddeo. She pretends to be flattered and makes a show of soulful attentiveness to Mustafà. Encouraged in his advances by Lindoro, Mustafà sneezes but Taddeo infuriates him by pretending not to hear. When Isabella calls Elvira in and admonishes Mustafà to treat his wife kindly, he loses his self-control. His reaction is so vehement that all the others are seriously frightened.
Haly concludes from his recent experiences that for all their charm, Italian women are cunning and unpredictable.
Lindoro asks Taddeo to help him in making their plan succeed. Taddeo claims to be Isabella’s lover, without being contradicted by Lindoro. Mustafà appears, still in a rage but all too glad to believe Lindoro’s protestation that Isabella is madly in love with him and even wishes to raise him to the rank of a Pappataci. Lindoro and Taddeo explain to him that all a Pappataci has to do, in addition to enjoying the pleasures of love, is to devote himself to sleeping, eating and drinking. Mustafà is delighted at the prospect.
Isabella has persuaded Mustafà to have all the Italian slaves take part in the Pappataci initiation ceremony. Her compatriots promise her to show bravery in the impending adventure. Isabella seeks to arouse Lindoro’s courage by appeal­ing to his sense of patriotism and honour and to his love for her.
Mustafà is asking after Isabella when a host of Pappataci approach and bring him the clothing worn by those of their rank. At Isabella and Lindoro’s request, Mustafà pronounces the solemn vow, which Taddeo reads out for him, to fulfil the duties of a Pappataci, that is to say, to ignore everything going on around him and concentrate solely on eating and keeping silent. Now comes the test. When Isabella and Lindoro fall into each other’s arms, Mustafà interrupts his eating to protest. Taddeo reminds him of his oath, which Mustafà now fulfils to the letter. The ship is ready to leave and the liberated Italians swiftly take flight. When Isa­bella calls Lindoro by name in everybody’s presence, Taddeo finally realizes the delusion he has been living under but still joins his fellow Italians in flight. Elvira, Zulma and Haly open Mustafà’s eyes to what is going on. He calls out in vain for help. The ship takes to the sea with the Italians and Mustafà returns to his wife.