Donizetti's Anna Bolena was one of the signature roles of the recently deceased Edita Gruberova. In memory of the soprano, the Opernhaus dedicates the premiere of its new production to her. 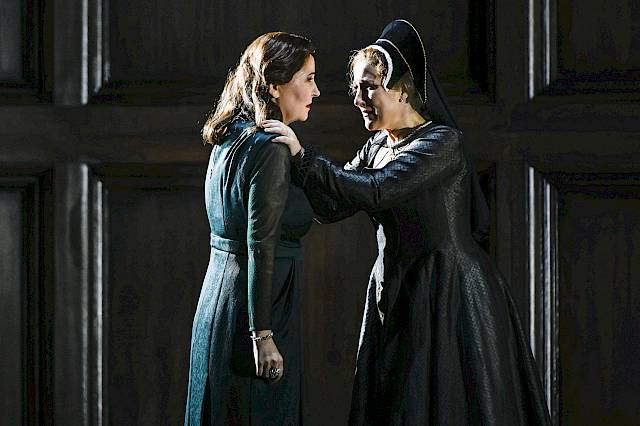 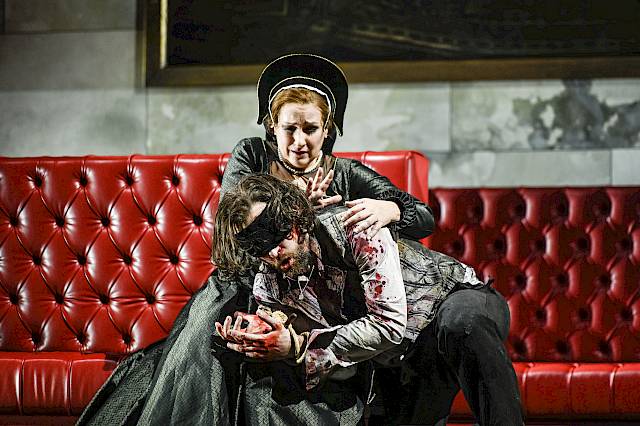 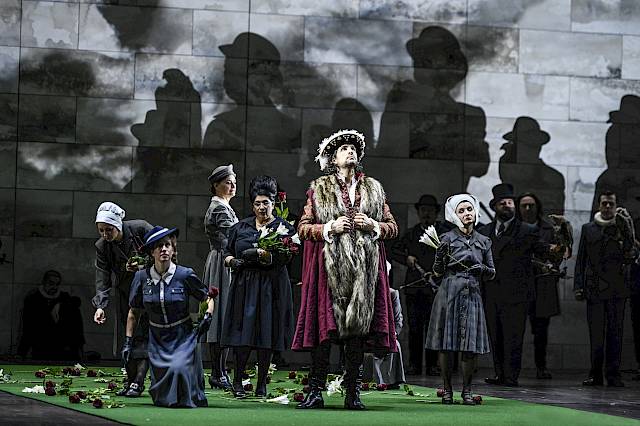 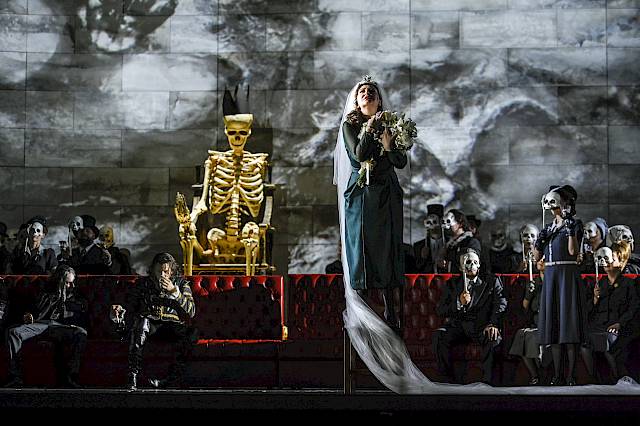 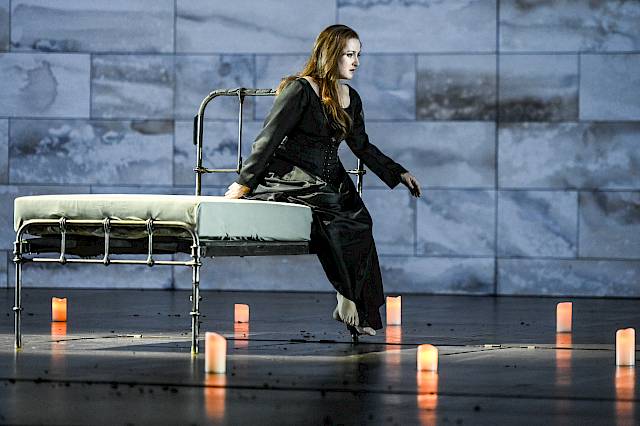 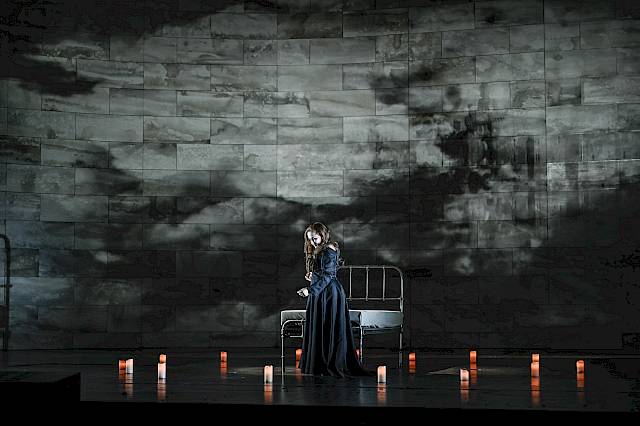 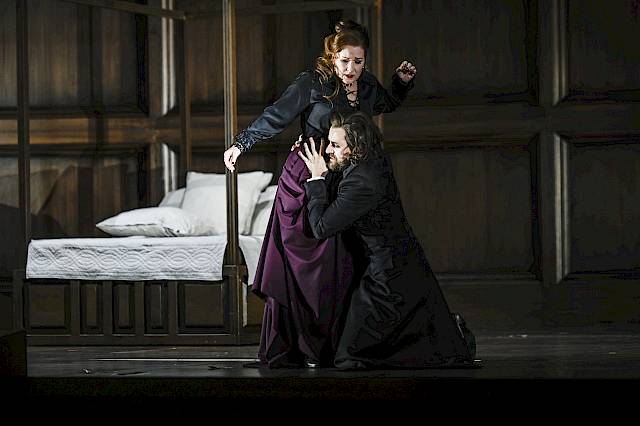 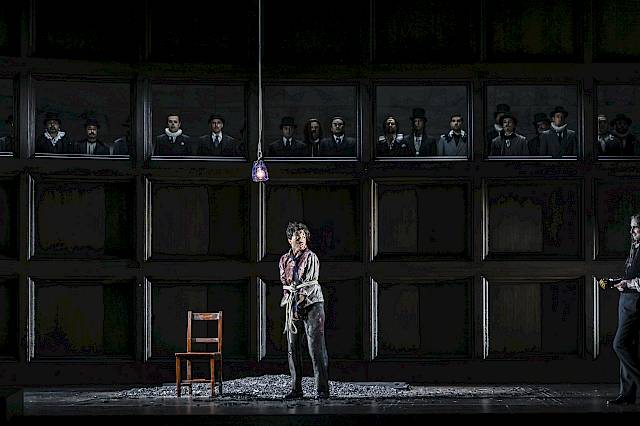 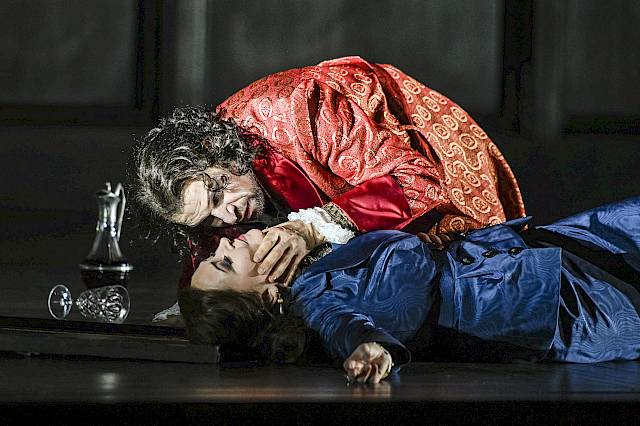 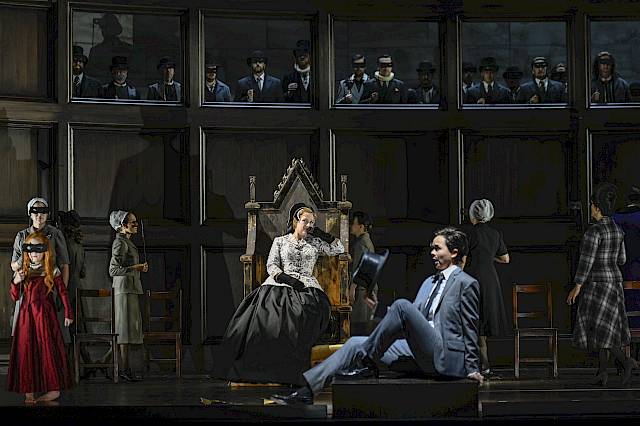 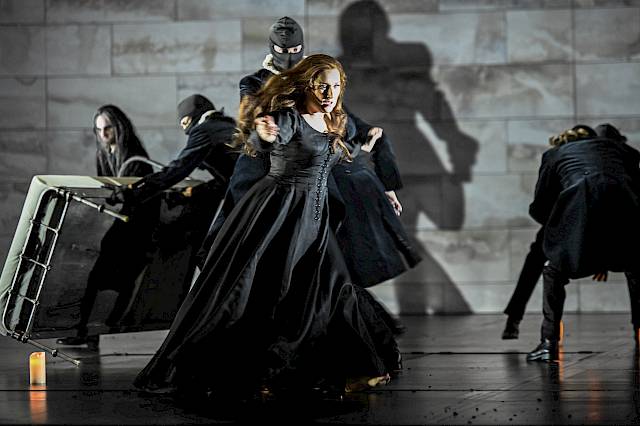 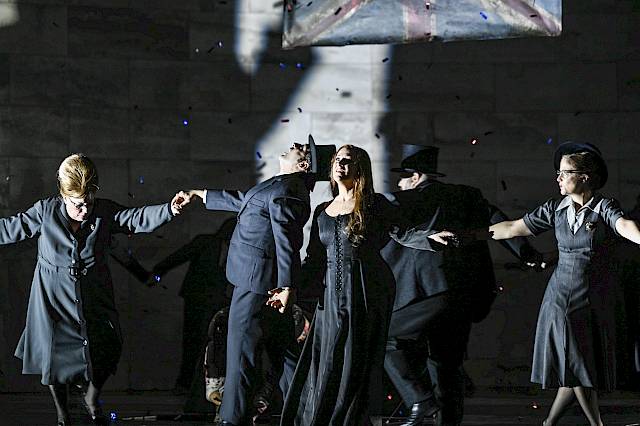 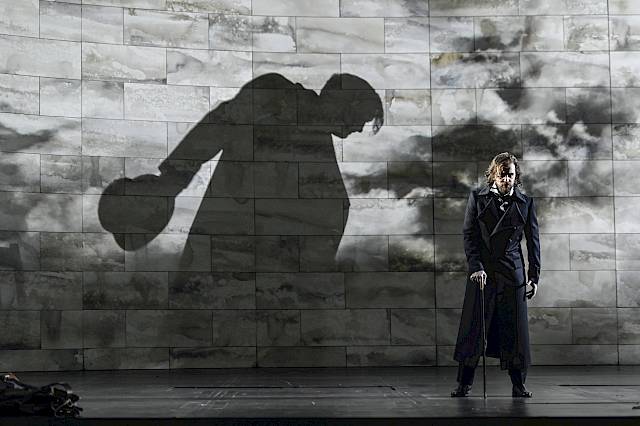 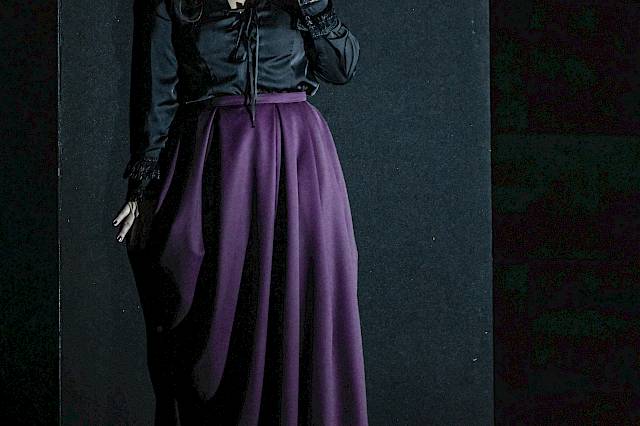 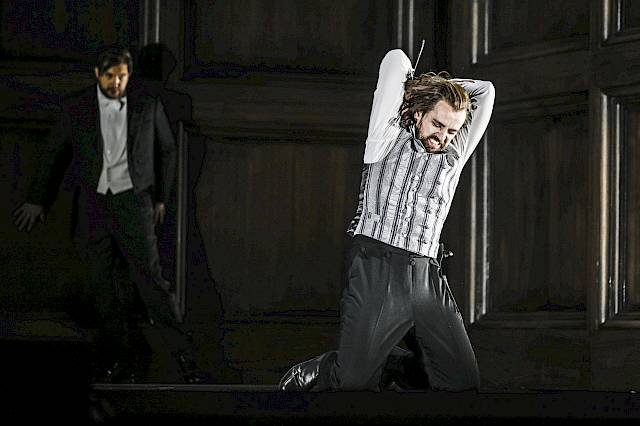 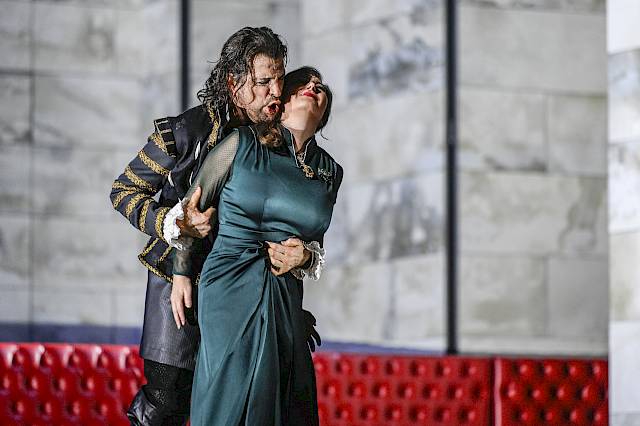 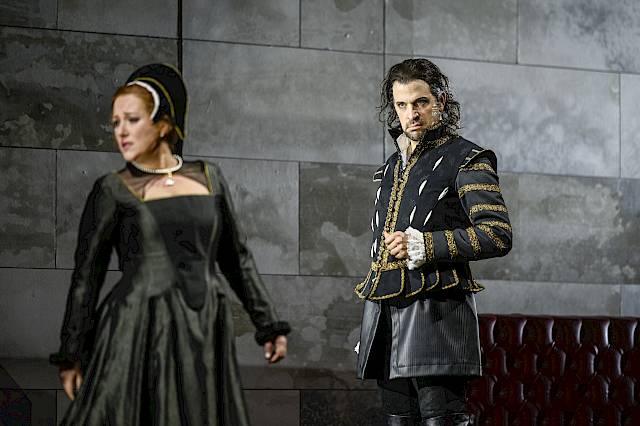 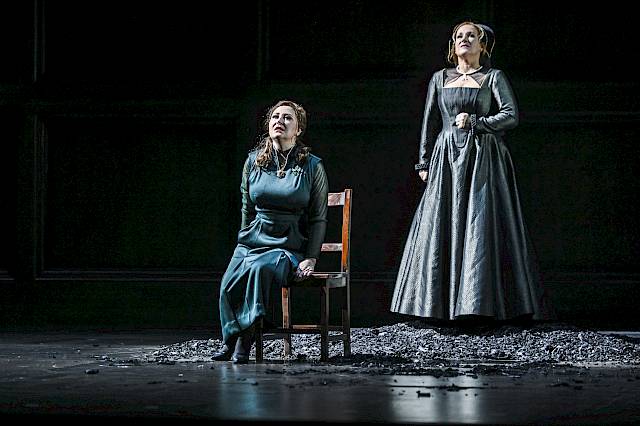 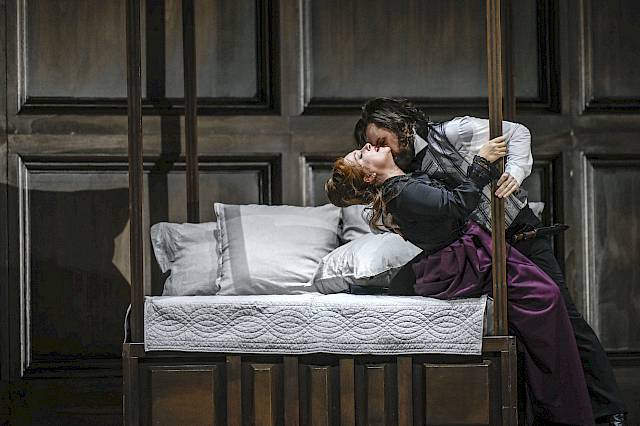 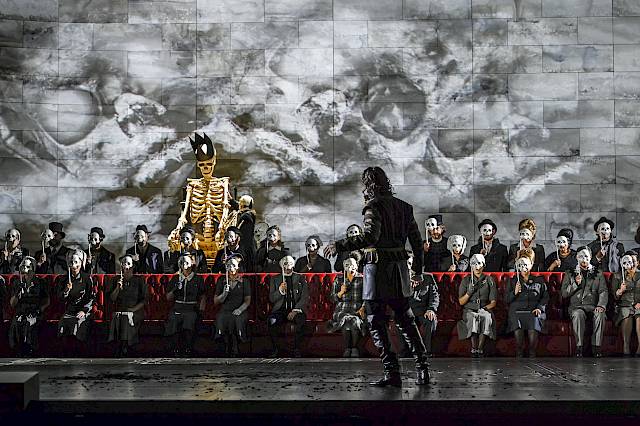 Act one
Members of the royal household are awaiting Henry VIII’s arrival. The King’s failure to appear confirms fears at court that he has grown weary of Anne and turned to another woman. Jane Seymour is one of the Queen’s ladies-in-waiting. She is unsettled because the Queen has summoned her without knowing that she is Henry’s mistress.
Anne Boleyn appears, filled with foreboding. She asks her musician Smeaton to sing a song to while away the time for her retinue. Anne is disturbed by Smeaton’s song: it reminds her of  her early love, Lord Percy, whom she abandoned to become Queen of England. Anne dismisses her household. In response to Jane asking her what is oppressing her, she urges her never to be seduced by fame and prestige.
Jane remains behind, troubled. When the King appears, she declares to him that she must end the relationship unless he grants her a legitimate place at his side. Henry assures her that he has already found a way to separate from Anne. Torn by her feelings, Jane foresees Anne’s impending downfall.
At Henry’s behest, Anne’s childhood friend Percy has returned after many years in exile. He encounters Anne’s brother, Lord Rochford, who tells him about Anne’s joyless existence as Queen. Percy, who still loves Anne, entertains new hope.
Henry appears with his hunting party and observes Anne and Percy’s meeting. He orders his confidant, Hervey, to observe their every move.
Smeaton, who is secretly in love with Anne, has slipped into the Queen’s apartments in order to return a stolen portrait. Hearing footsteps, he hides: it is Anne, followed by her brother, who has obtained access to her chambers for Percy. After some initial hesitation, Anne agrees to receive Percy.
Percy besets Anne with memories of their early happiness. When she resolutely rejects his declarations of love and commands him to leave England, Percy wants to take his own life. Smeaton, however, believes that Percy is about to attack Anne, and rushes out of his hiding place to prevent him from doing so. At that moment, the King appears and accuses Anne and Percy of adultery. When Smeaton protests Anne’s innocence, coincidence deals Henry another trump card: Smeaton drops Anne’s portrait. Henry’s order to take the two men and the Queen to prison awakens Anne’s worst fears.

Act two
Hervey summons Anne’s ladies, who are lamenting their Queen’s fate, to appear as witnesses before the court.
Anne remembers the lot of her predecessor, Catherine of Aragon, and begs God for assistance.
Jane attempts to convince the Queen that she should at least save her life by pleading guilty. Outraged, Anne rejects this proposal and curses her unknown rival. Overwhelmed by fear and remorse, Jane confesses that she herself is Anne’s rival. Once her initial rage has subsided, Anne forgives her lady-in-waiting: it is not she who is to blame for her love for Henry, but the King who has seduced her.
Hervey tells the courtiers present about Smeaton’s confession to having committed adultery with the Queen. Henry gives orders for the situation to be kept secret for the time being.
On the way to the courtroom, he encounters Anne and Percy. The Queen implores Henry not to debase her by subjecting her to a trial, and Percy assures him of her innocence. Provoked by Henry, Percy announces to him that he is married to Anne. The King swears bitter revenge, which will also strike Anne’s daughter, Elizabeth.
After Anne and Percy have been led away, Jane appears and begs Henry to be merciful towards Anne. Hervey reports that the court has unanimously condemned the Queen and all her accomplices to death.
Percy and Rochford are bidding one another farewell when Hervey brings the news that the King has pardoned them. Both decide to share Anne’s fate and choose death.
Anne’s ladies-in-waiting report that her mind is confused.
Awaiting her execution, Anne reminisces about her youth. Festive music accompanying Henry’s wedding to Jane rouses her from her delirium. Smeaton confesses to the Queen that he committed perjury in court in the belief that it would save her life. Anne forgives him and beseeches Heaven to bring her misery to an end. While Smeaton, Percy and Rochford are taken to the place of execution, Anne forgives the new royal couple in the hope that Heaven will also forgive her. Her executioner appears.