Mozart’s Magic Flute remains an uncontested favourite with audiences. The opera is great fun, but also explores the major themes of human existence – love and solitude, vengeance and the proximity of death, earthly pleasures and the loftiest ideals. It is at once a dreamily beautiful fairy tale, a noble mystery play and a piece of sturdy Viennese suburban theatre.

This season, we shall again be showing our production by Tatjana Gürbaca, which does justice to Mozart’s comedy and the profound dimensions of the mystery play in equal measure. Gürbaca associates the spheres of the Queen of the Night with an earthy, wildly anarchic world, contrasting it with Sarastro’s temple – a realm of clearly defined power structures and bourgeois order. With a great deal of imagination for her setting, Gürbaca has these contrasting worlds collide, combining the sheer fun of theatrical disguise with profoundly melancholic scenes, and showing the female figures as consistently strong women. The very emancipated Queen of the Night rebels against Sarastro’s ossified male society, and Pamina, hungry for life and love, confidently seeks her own path in life. The cast consists of outstanding members of the ensemble: once again, Swiss tenor Mauro Peter will sing Tamino, and Ruben Drole will delight audiences as Papageno. Olga Kulchynska – celebrated last season among other roles as Gretel in Engelbert Humperdinck’s Hänsel und Gretel – will sing Pamina. The Austrian conductor Sascha Goetzel comes from the city in which The Magic Flute was premièred – Vienna. 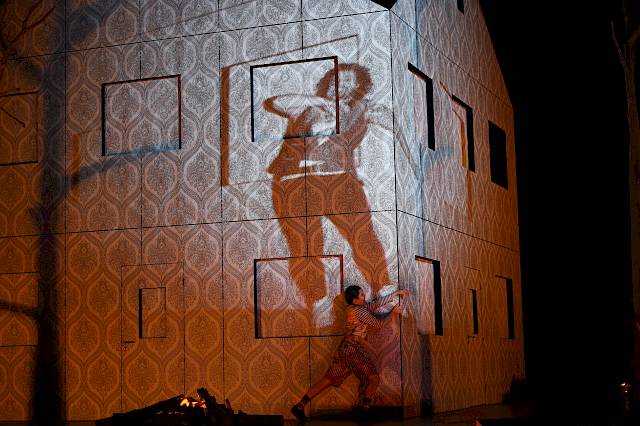 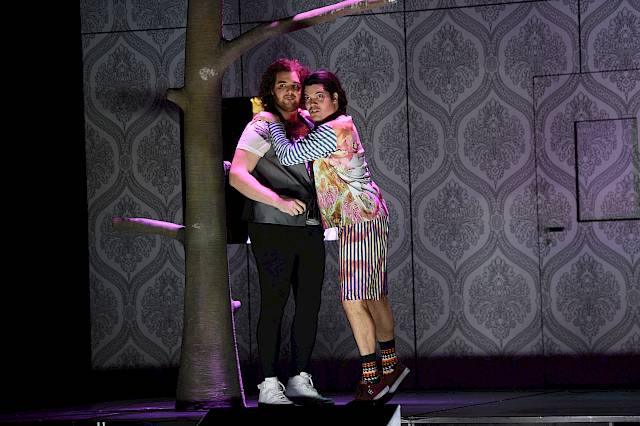 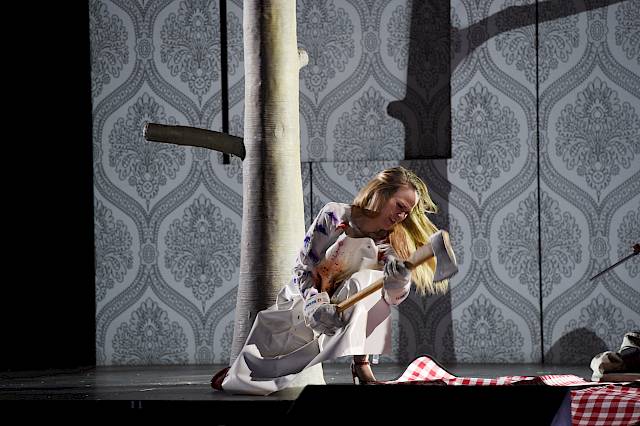 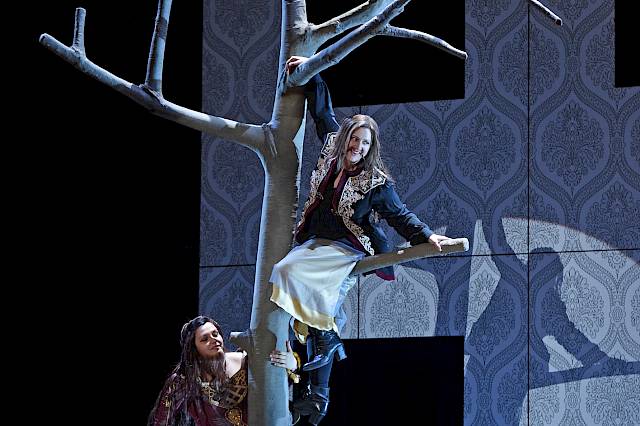 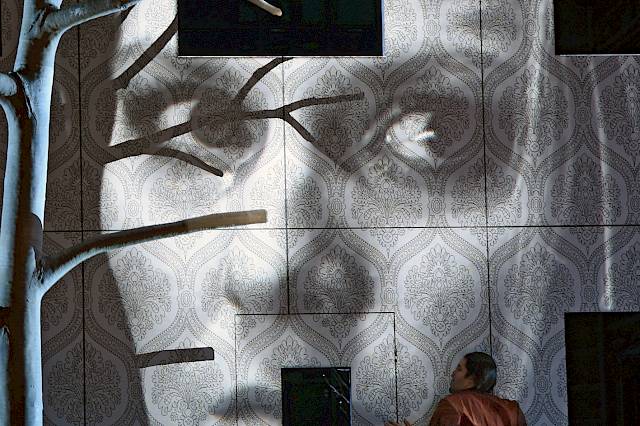 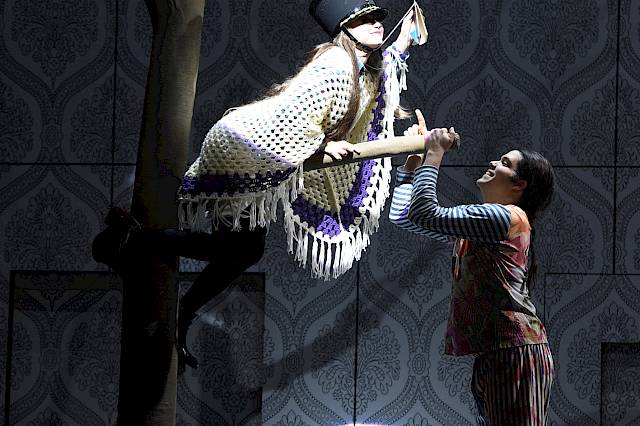 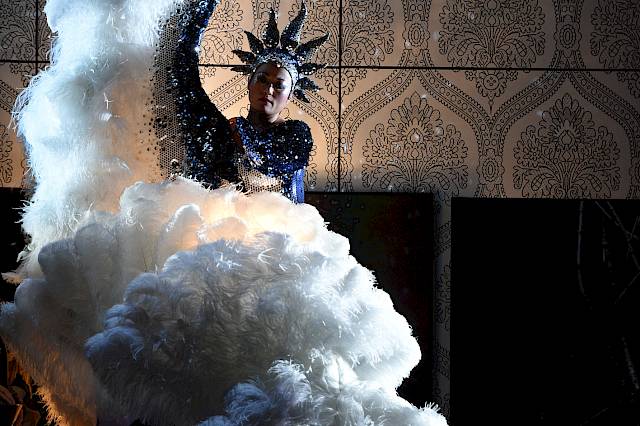 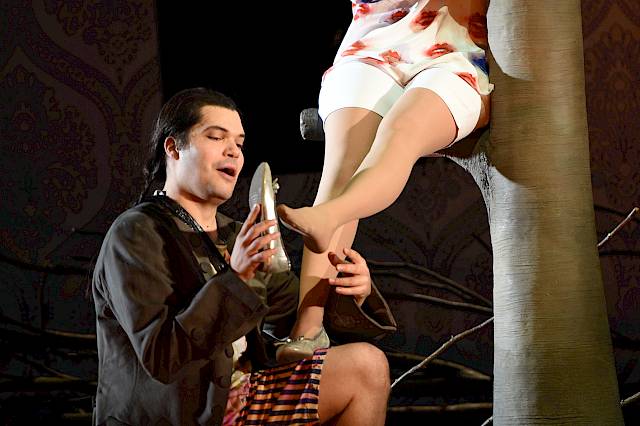 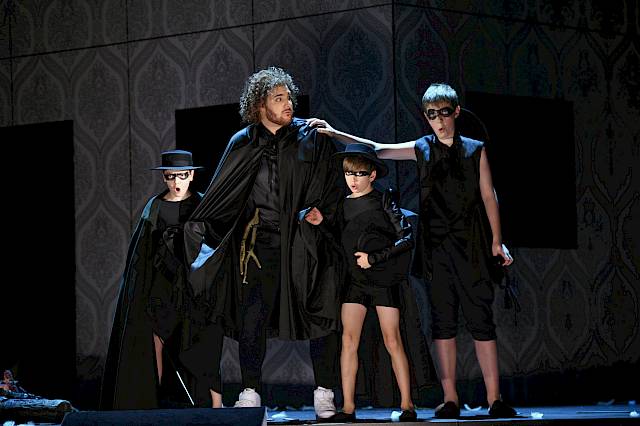 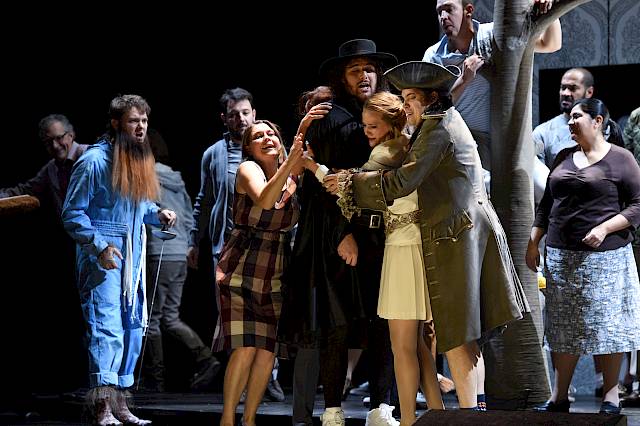 Act One
Menaced by a serpent, Tamino desperately cries for help. He is saved by three ladies from the realm of the Queen of the Night. Having admired the young man’s beauty, they vanish. Left alone, Tamino is bewildered by what he has just experienced. He hears someone approaching and hides. Papageno, the Queen of the Night’s bird catcher, appears, singing of his yearning for a girl to love. He boasts to Tamino that it is he who killed the serpent. The three ladies punish Papageno for this lie by placing a padlock over his mouth. The ladies show Tamino a portrait of Pamina, the Queen of the Night’s daughter. Tamino falls in love with the picture.
The Queen of the Night appears. She promises Tamino her daughter’s hand in marriage if he succeeds in bringing her back from the realm of the evil Sarastro. The three ladies remove the padlock from Papageno’s mouth and tell him to accompany Tamino on his mission. The ladies give the pair a magic flute and a set of magic chimes to take with them, and announce that the three boys will show them the way.
The outsider Monostatos has Pamina in his clutches and is threatening her. Papageno finds Pamina, recognises her and tells her about Tamino, the prince who has fallen in love with her and is on his way to rescue her. Pamina and Papageno realise that they both believe in love: “We live by love alone.” The three boys have led Tamino to Sarastro’s house. There, the prince encounters a speaker, who makes him less certain of his hatred for Sarastro. Voices from inside the house announce that Pamina is still alive. Overjoyed at the news, Tamino plays his magic flute, whereupon wild animals appear.
Pamina and Papageno attempt to escape, but are caught by Monostatos. Papageno staves off the danger with his chimes. The people announce the arrival of Sarastro, the “divine sage,” “whom we all revere.” Pamina appears before Sarastro and attempts to justify herself. Sarastro, however, refuses to grant her freedom. Monostatos brings Tamino to Sarastro. Tamino and Pamina see one another and embrace. Sarastro has Monostatos punished and decides to lead Tamino and Papageno into the temple of trials.

Act Two
Sarastro declares that he intends to admit Tamino to the circle of the initiated. While Tamino is immediately prepared to undergo the necessary trials, only the prospect of finding the right girl will persuade Papageno. In the first trial, the two are forbidden to speak to women. When the three ladies appear in order to seduce Tamino and Papageno, they attempt to remain steadfast, at which Tamino is more, Papageno less successful.
Having crept up on Pamina, Monostatos complains that she does not love him, the outsider. Then, the Queen of the Night visits her daughter. She tells Pamina that her aged husband gave the powerful sun circle to Sarastro on his deathbed, passing her over has his heiress. She tells Pamina to kill Sarastro. Monostatos again pesters Pamina. Sarastro intervenes and declares that vengeance is unknown in his realm, but qualifies this by stating, “He who does not rejoice in such teaching does not deserve to be a man.”
Tamino and Papageno are still forbidden to speak. Papageno, however, chatters with a girl in disguise who has taken a fancy to him. Before Papageno can find out who she is, she vanishes. The three boys return the magical instruments, which had been taken from them, to Tamino and Papageno. Pamina finds Tamino, but he remains silent and turns away from her. Pamina descends into a state of profound melancholy and longs for death.
Sarastro brings Tamino and Pamina together in order to say their farewells. For the initiated, Pagageno is a hopeless case. All he wants is a “girl or little wife.” The girl does appear, but again vanishes. The three boys prevent Pamina from committing suicide.
Two men in armour lead Pamina and Tamino to the life-threatening trial by fire and water. They survive. Papageno cannot find his girl and decides to end his own life. In vain. The three boys appear and remind him of the chimes. He plays them, and Papagena indeed appears.
The Queen of the Night, the three ladies and Monostatos once again intrude in Sarastro’s temple, but are “crushed and destroyed.” The rays of the sun banish the night. 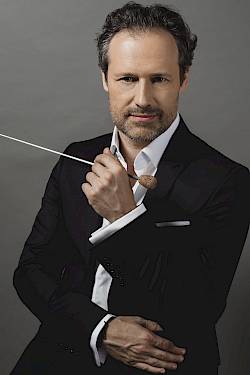 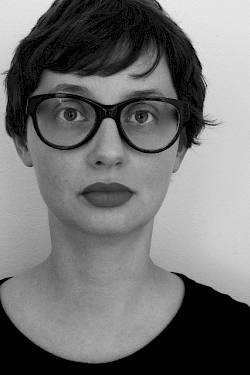 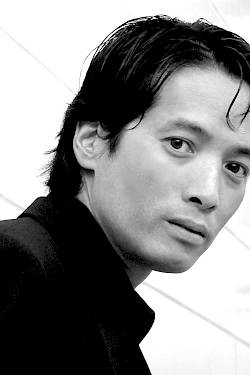 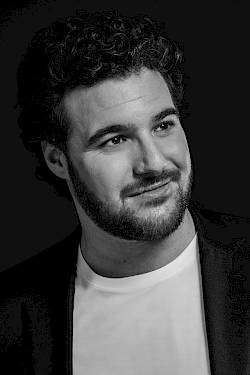 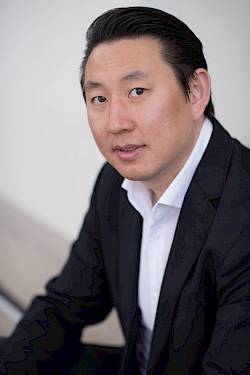 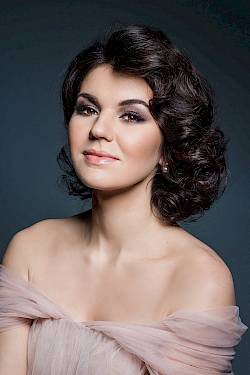 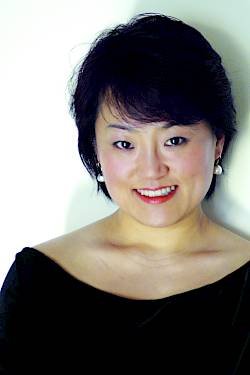 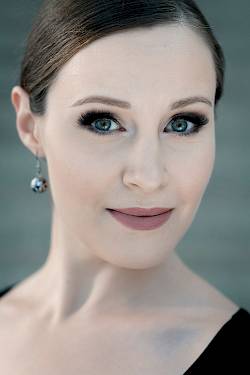 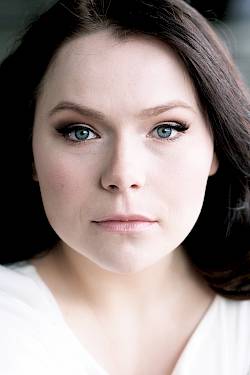 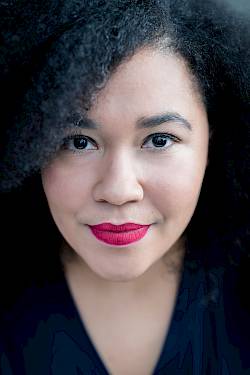 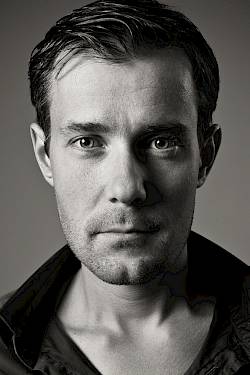 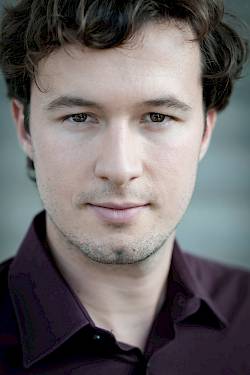