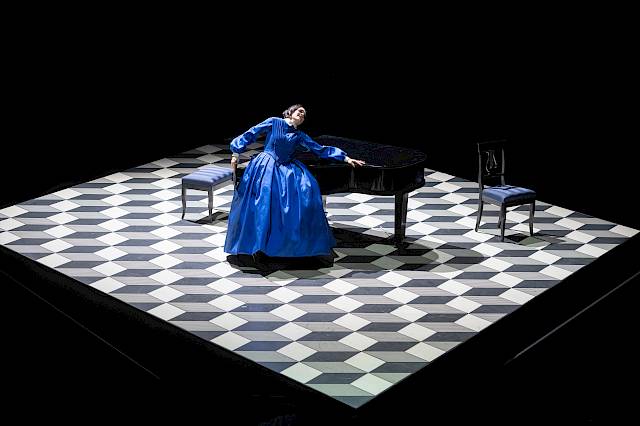 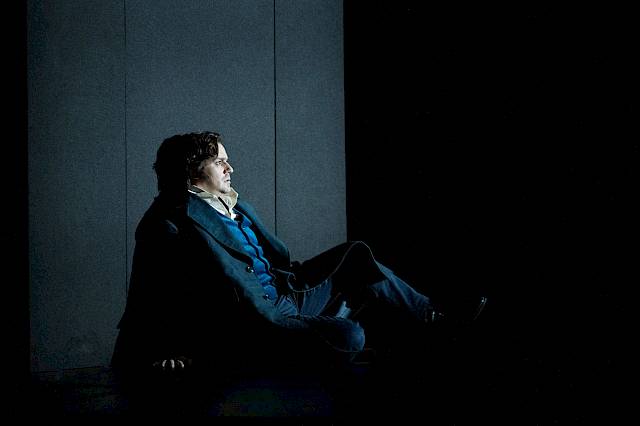 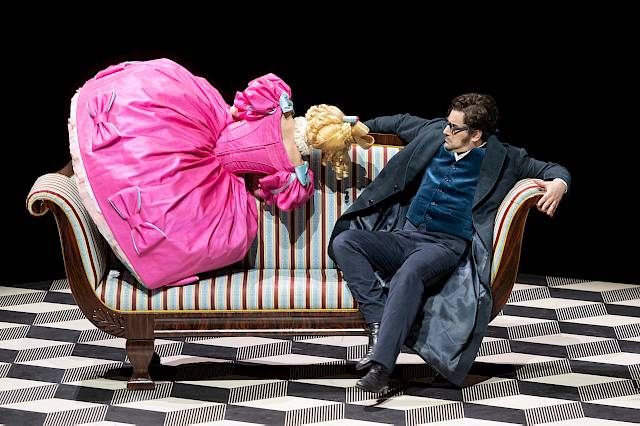 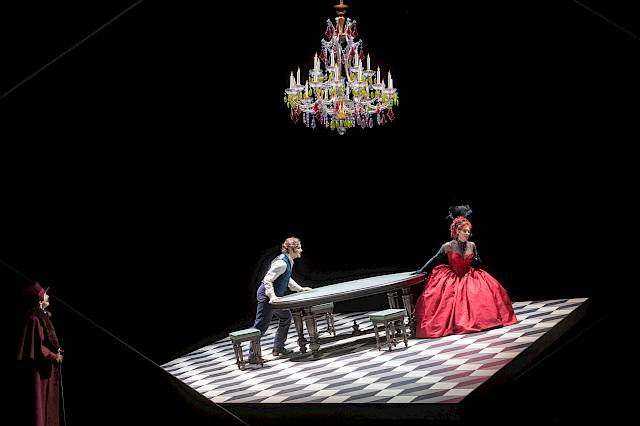 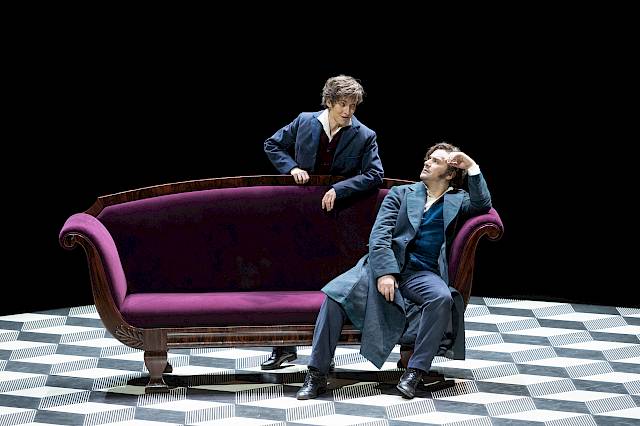 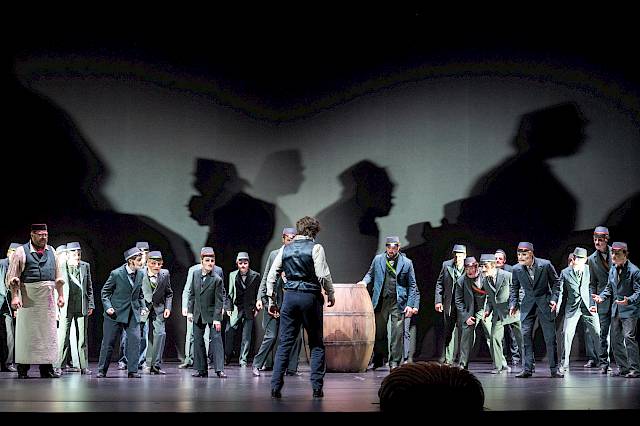 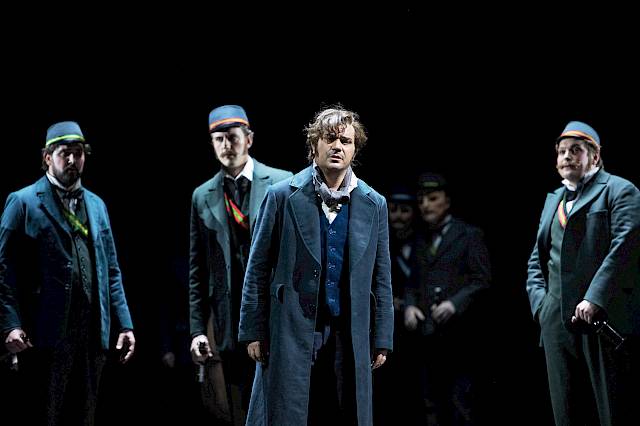 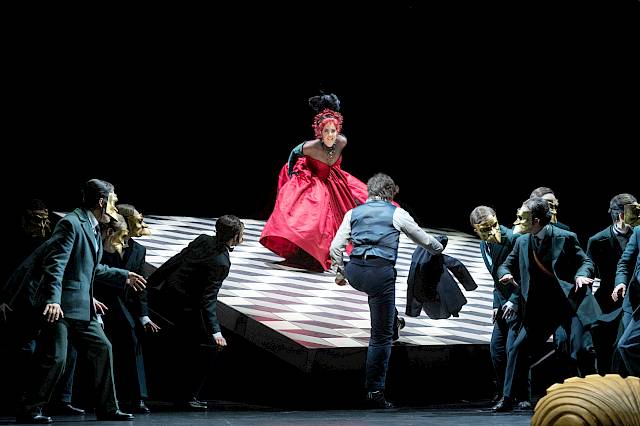 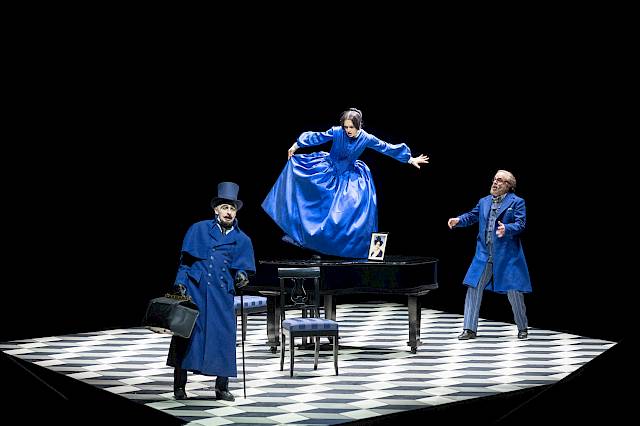 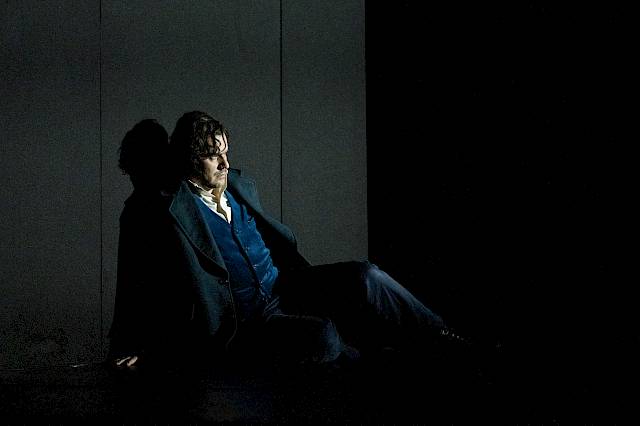 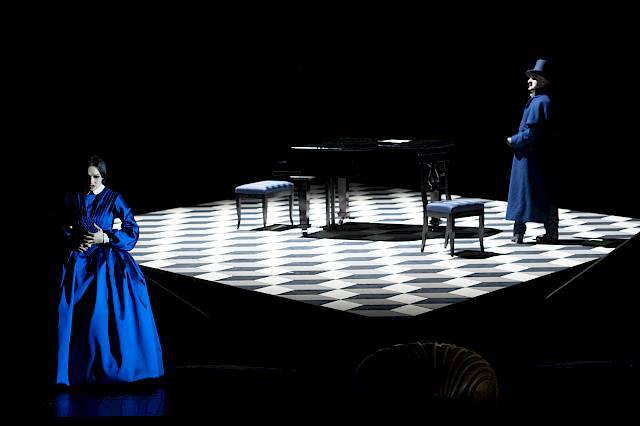 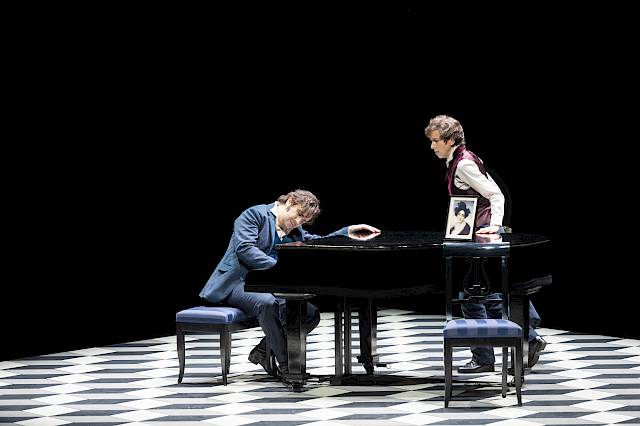 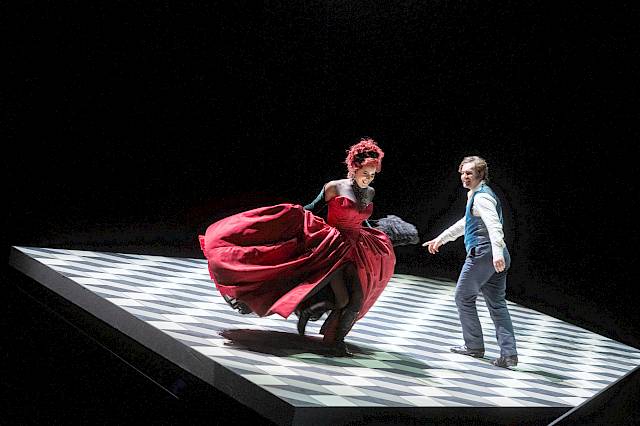 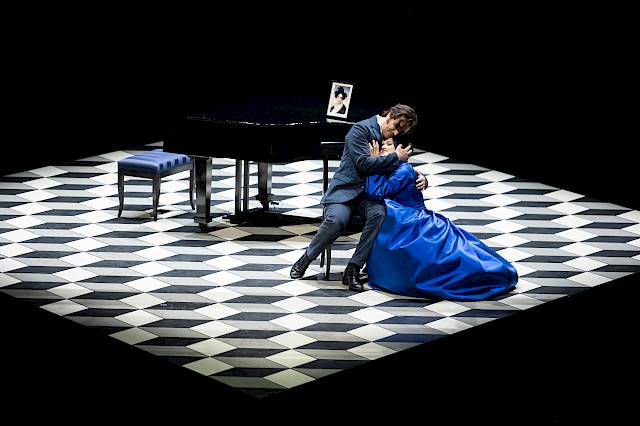 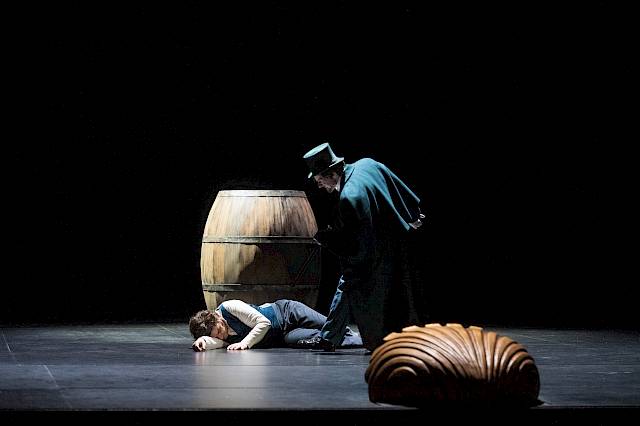 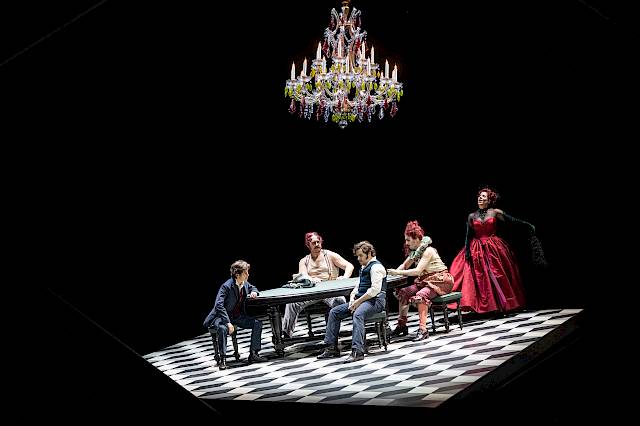 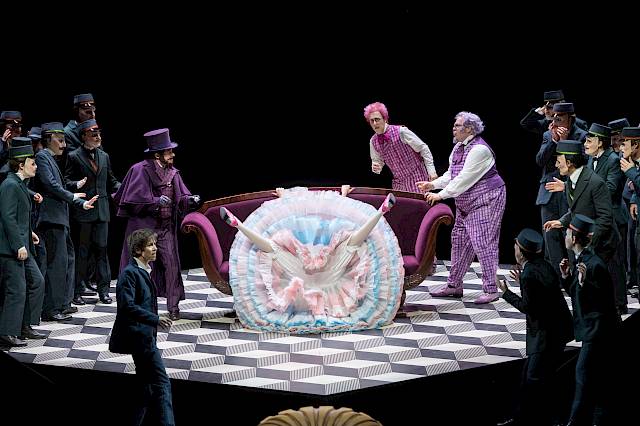 Act One
The Muse would like to win Hoffmann back – both for herself and for art. To this end, she impersonates the student Nicklausse so as to enable her to accompany Hoffmann on his adventures.
While Mozart’s Don Giovanni is being performed at the theatre next door, a group of students gather to spend an evening of carousing at Luther’s Wine Cellar. They are joined by Hoffmann and Nicklausse. Hoffmann has fallen for Stella, who is singing the role of Donna Anna. Stella’s servant is supposed to be bringing Hoffmann a letter containing the key to her dressing room, but Lindorf, who also desires the singer, intercepts the envelope with a view to paying her a visit himself.
Hoffmann keeps everyone amused by singing the ballad of Kleinzach. Yet his thoughts constantly return to Stella.
He eventually starts talking about three of the women he has known in his life.

Act Two
In the physicist Spalanzani’s house, Hoffmann comes across the beautiful Olympia. He chooses to ignore Nicklausse’s ironic remarks about Olympia being just a doll. Coppélius, who introduces himself as a friend of Spalanzani’s and is a dealer in optical devices and artificial eyes, sells the poet a pair of miracle spectacles, thanks to which Hoffmann indeed finds Olympia’s performance all the more beguiling. He confesses his feelings to Olympia – and interprets her monosyllabic responses of “yes, yes” as passionate protestations of love. During the fast waltz that he then dances with Olympia, the doll rapidly becomes uncontrollable, and Hoffmann loses his spectacles.
In the meantime, Coppélius, who made Olympia’s eyes, has discovered that the cheque with which Spalanzani intended to fob him off is worthless. Enraged, he returns and destroys the doll.
Hoffmann realises that he has been in love with an automaton.

Act Three
Antonia, Crespel the violin maker’s daughter, is singing a wistful song. Her father, however, forbids her to sing, as she is risking her life – Antonia’s mother, a celebrated singer, died of the same mysterious disease.
Crespel impresses on his servant Frantz not to let anybody into the house. Frantz, however, is hard of hearing, and when Hoffmann appears, he gives him a warm welcome. Antonia and Hoffmann fall into one another’s arms.
When Crespel returns, Hoffmann hides and witnesses Doctor Miracle examining Antonia. Crespel turns Miracle out of the house, as he believes that the mysterious doctor is responsible for his wife’s death and that he will also kill Antonia.
Hoffmann has now learned that Antonia is doomed to die if she continues to sing. Alone with her again, he makes her promise to relinquish her singing career.
Scarcely has Hoffmann left than Miracle returns and describes to Antonia the splendid life of a singer in glowing colours. Antonia attempts to resist the temptation with all her strength and to keep her promise, but when her departed mother appears, she joins in her song – and dies.

Act Four
Hoffmann has decided to renounce all romantic sentiments and to devote himself entirely to transient pleasures. Then, however, he encounters the courtesan Giulietta, who maintains mysterious links to Capitaine Dapertutto. Giulietta introduces Hoffmann to her other guests – these include Schlemihl, who is in possession of her key.
Dapertutto orders Giulietta to seduce Hoffmann and demand that he give her his reflection; she has already procured Schlemihl’s shadow for Dapertutto in the same manner. When Giulietta hesitates, Dapertutto tells the courtesan how disparagingly Hoffmann has spoken of her. Giulietta now agrees to Dapertutto’s request and easily succeeds in seducing Hoffmann.
In order to gain possession of Giulietta’s key, Hoffmann kills Schlemihl in a duel.
Schlemihl’s death is discovered; Hoffmann is forced to flee. Giulietta implores him at least to entrust his shadow to her if he has to leave her. Hoffmann consents – and realises that Giulietta has deceived him.

Act Five
Back at the wine cellar, Hoffmann has finished telling his stories, and the performance of Don Giovanni has also come to an end. After her triumph as Donna Anna, Stella has waited for Hoffmann to no avail. Together with Lindorf, she now appears in the wine cellar. Hoffmann, however, is drunk and mocks both of them as he sings the last verse of the ballad of Kleinzach.
When Hoffmann learns that Stella has written him a letter that he never received, he is distraught.
Will Stella forgive him?