In Italian with German and English surtitles. Duration 2 H. 30 Min. incl. intermission after 1st act after approx. 50 Min. Introduction 45 min before the performance.

With the kind support of Hans Imholz-Stiftung

Celebrated singer Floria Tosca has dedicated to life to her art and to her lover, Mario Cavaradossi. But Scarpia, chief of Rome’s police, has other plans: when Cavaradossi is suspected of aiding a political prisoner in his escape, Scarpia claims the painter and his beloved (who Scarpia desires) for himself. It’s the start of a terrifying night that claims all of their lives. Giacomo Puccini created a haunting portrait of a diva with his titular heroine, one who’s devoted her existence to the theater. She doesn’t differentiate between life on stage and off. Director Robert Carsen’s fascination with this character sparks an ingenious game of truth and lies, blurring the lines between theater and reality, all while staying true to the opera’s charged plot.

Sonya Yoncheva is one of today’s international superstars. She gave her debut as Tosca at the Metropolitan Opera in New York during the 2017/18 season, and has since bowed as the diva at the State Opera companies in Vienna, Berlin, and Munich. Her last-minute appearance as Violetta in La traviata in Zurich in 2015 created waves, and this production, under the musical direction of Paolo Carignani, marks her return to the Opernhaus. Tenor Joseph Calleja is no stranger himself to the great opera houses of the world, and he joins Yoncheva on stage as Cavaradossi. Baritone Thomas Johannes Mayer, last seen in Zurich in Schreker’s Die Gezeichneten and as Jochanaan in Strauss’ Salome, sings Scarpia. 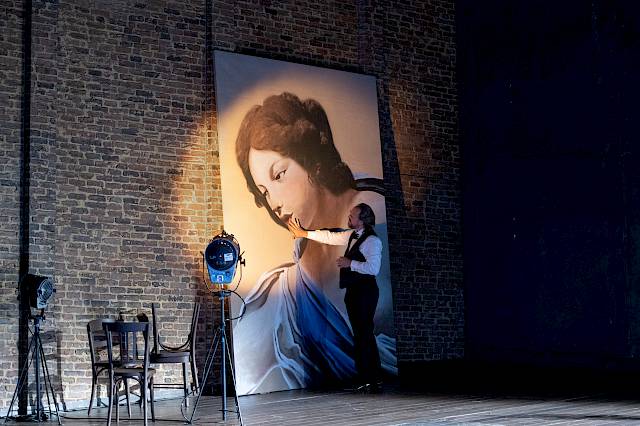 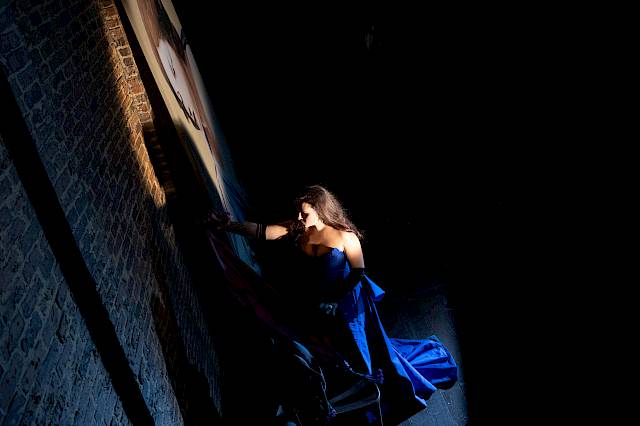 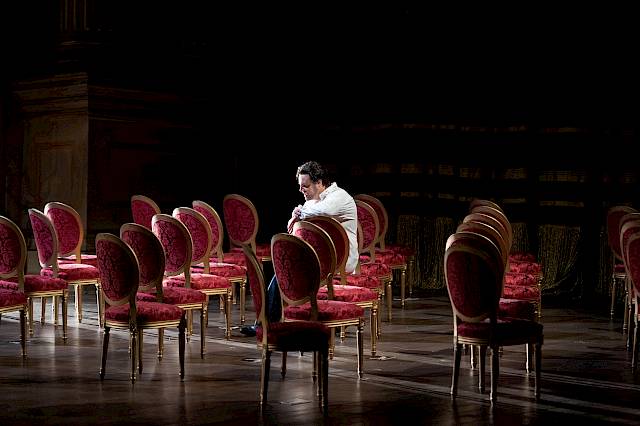 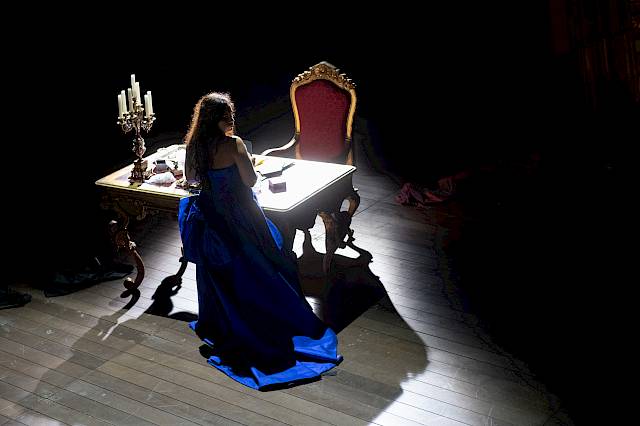 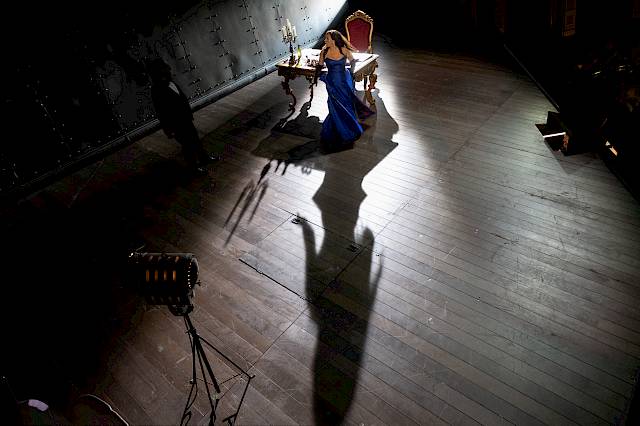 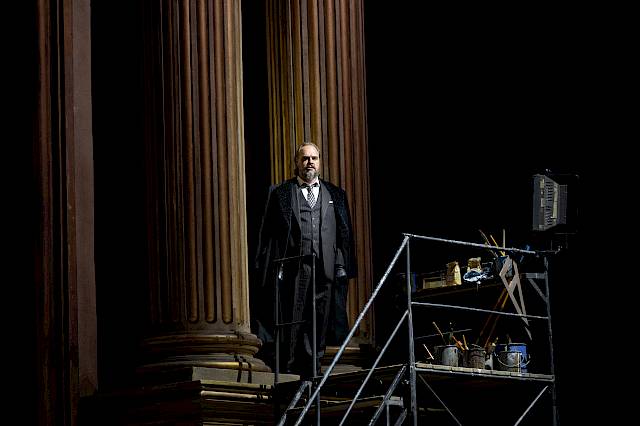 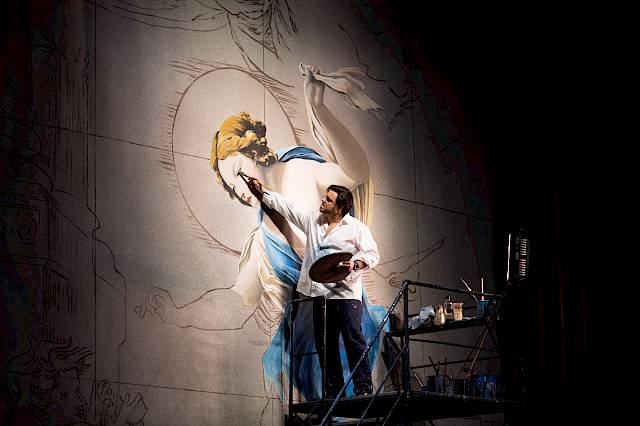 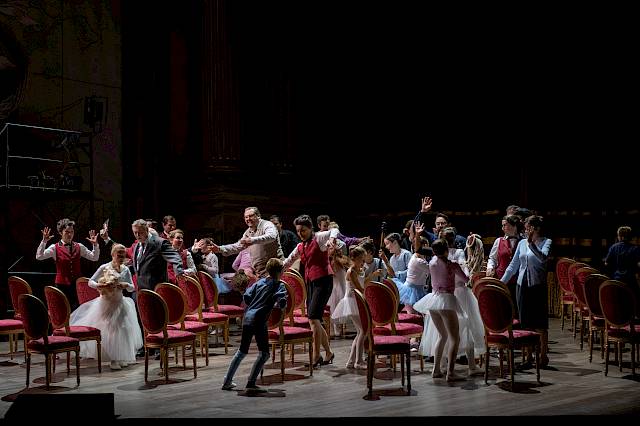 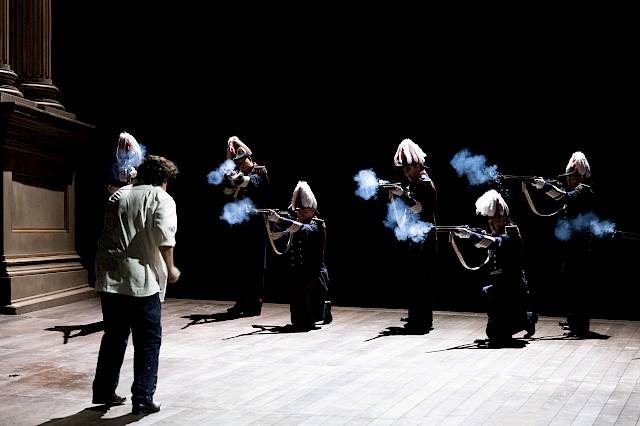 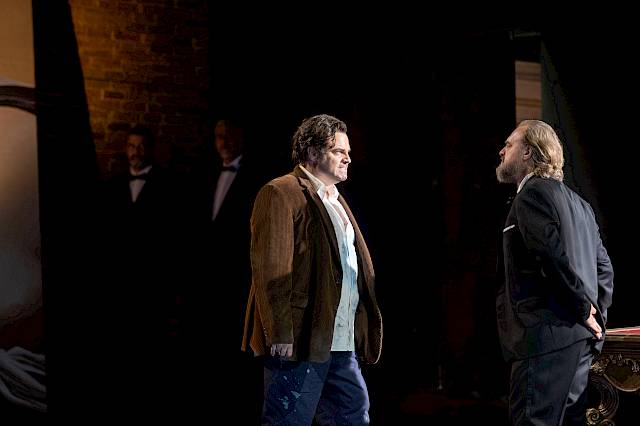 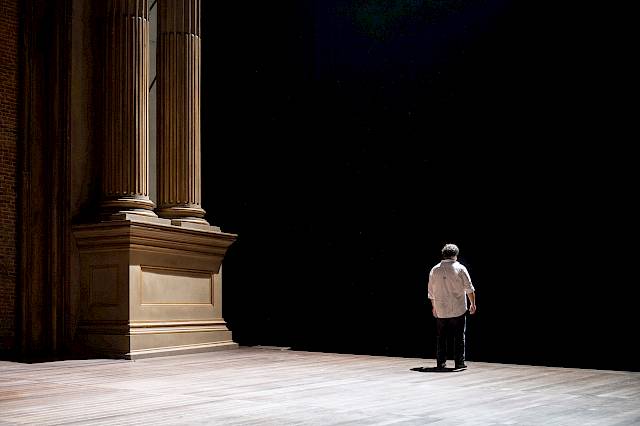 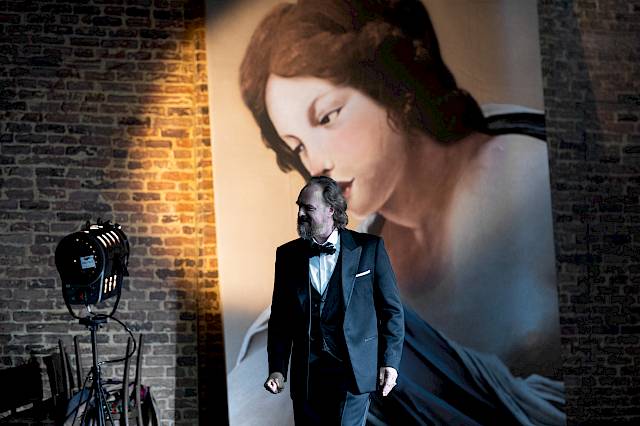 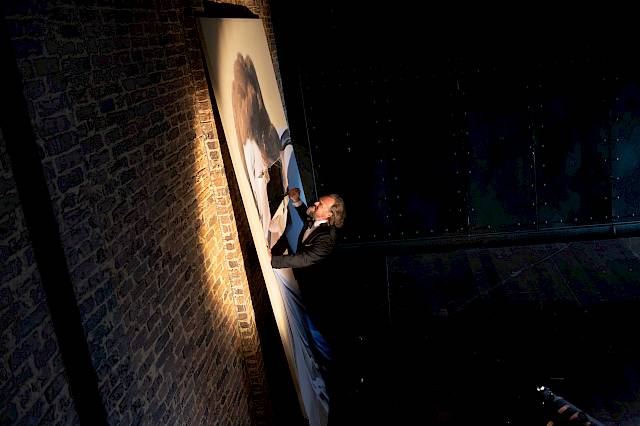 Act One
Interior of the Church of Sant' Andrea della Valle
Cesare Angelotti, a political prisoner who has just escaped from the Castel Sant’ Angelo, furtively enters the church to hide in the private chapel of his sister, the Marchesa Attavanti. The sacristan enters and is surprised to see that the painter, Mario Cavaradossi is not at work. Cavaradossi arri­ves and attempts to resume his work - a painting of a blonde blue-eyed Mary Magdalen, inspired by the Marchesa Attavanti, whom he has seen praying in the church lately. Cavaradossi compares the dark beauty of his beloved Floria Tosca, the most celebrated Prima Donna of her day, with the fair Magdalen.
The sacristan leaves. Angelotti, believing the church to be empty, steps from his hiding place and is discovered. He is relieved to recognize Cavaradossi, who agrees to help him. Suddenly Tosca’s voice is heard, and Angelotti hides once again. The jealous diva enters, convinced that Cavara­dossi was with another woman. Preoccupied with Angelotti, Cavaradossi quiets her suspicions, and they plan a rendez-vous later that evening. As she is about to leave, Tosca sees the painting, and jealously recognizes the Marchesa Attavanti. Cavaradossi persuades her that his model is sim­ply an unknown worshipper, and they part.
Angelotti emerges just as a cannon shot signals the discovery of his escape. Cavaradossi offers to hide him in his nearby villa, and the two men flee together. The sacristan returns, accompanied by members of the choir. All are excited by the latest news: Napoleon has been crushed at Marengo. There is to be a victory celebration that evening at the Farnese Palace, where the choir will sing a new cantata, with Floria Tosca as soloist.
Suddenly, Baron Scarpia, chief of the Roman police, enters. He and his agent Spoletta have traced Angelotti to the church. After questioning the sacristan, Scarpia surmises that Cavaradossi, a sus­pected Republican sympathizer, has aided the fugitive’s escape. Tosca returns to tell Cavaradossi that she cannot join him later. Scarpia, who desires her, seizes the opportunity to arouse Tosca’s jealousy, and to discover Angelotti’s hiding place. He shows her a fan he has found bearing the Attavanti crest. She is consumed with jealousy and leaves to confront her lover, with Scarpia’s spies following her. Scarpia gloats over the impending realization of his double goal - Cavaradossi on the gallows and Tosca in his arms. Swept up in his vision, he declares that Tosca has made him forget God.

Act Two
Scarpia's apartment in the Farnese Palace
Scarpia is dining in his apartment, savouring the prospect of satisfying his desire for Tosca. He knows that she is singing before the Queen of Napels in another part of the Palace, and sends a note asking to see her. Spoletta enters and reluctantly reports that he followed Tosca to Cavaradossi’s villa, but could not find Angelotti. He quickly adds that he did find Cavaradossi, and has brought him for que­stioning. The painter denies any knowledge of the escaped prisoner, and Scarpia orders him tortured. Tosca arrives and Cavaradossi manages to warn her to say nothing before he is taken into an adjoi­ning room. Tosca skillfully evades Scarpia’s questions until her lover’s cries of pain are heard. Tosca pleads for Cavaradossi. Unable to bear such agony, she reveals Angelotti s hiding place. Cavaradossi is brought out and denounces Tosca for her betrayal. Sciarrone, another of Scarpia’s agents, enters to report a reversal at Marengo - Napoleon has won. Cavaradossi shouts his elation in defiance of Scarpia, and is taken away. Left alone with Scarpia, Tosca attempts to offer him money in exchange for her lover’s life. Scarpia names his price: Tosca herself. Her hatred only intensified his desire. Scarpia persists, and Tosca finally agrees to submit to him in exchange for her lover’s life. Scarpia explains that he cannot simply free Cavaradossi; a mock execution must be staged. Tosca demands that Scarpia write a safe-conduct letter for Cavaradossi and herself. When Scarpia finishes, he advan­ces to claim his prize. Instead Tosca stabs him to death ... She departs at the sound of a distant drum-roll.

Act Three
Ramparts of the Castel Sant'Angelo
Cavaradossi awaits his execution. Musing sadly on Tosca’s beauty and their love he writes her his farewell. She enters and tells him of their safe-conduct letter and of Scarpia’s death, explaining the need for the mock execution. The firing squad approaches. The soldiers fire and Cavaradossi falls. Tosca waits impatiently as the soldiers leave, and then runs to him. To her horror, she sees that he is dead and realizes that she has been tricked. Scarpia’s agents attempt to arrest her, but before they can reach her, she leaps to her death, crying: Scarpia, we will meet before God! 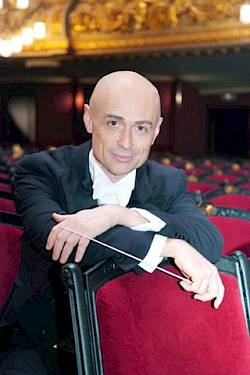 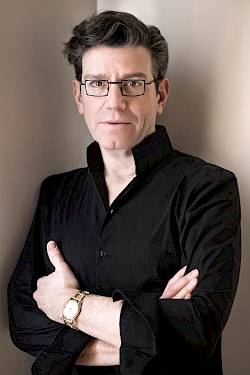 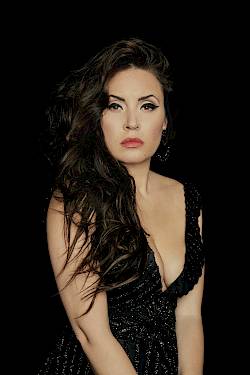 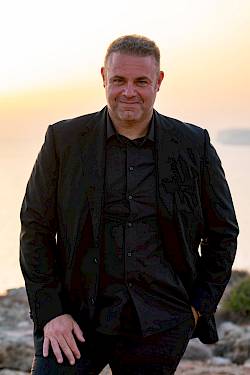 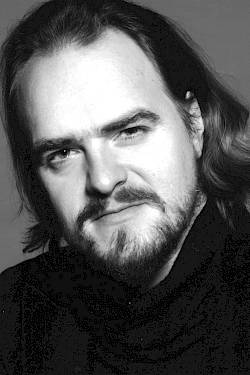 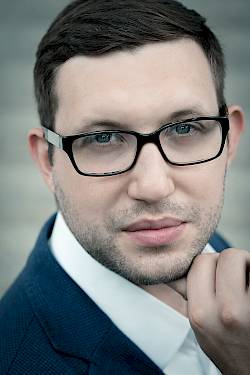 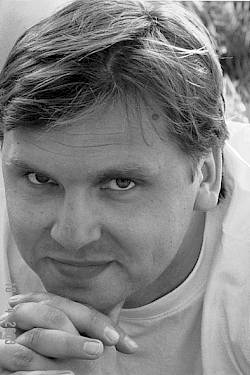 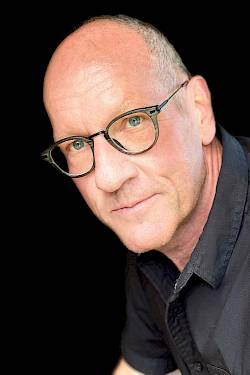 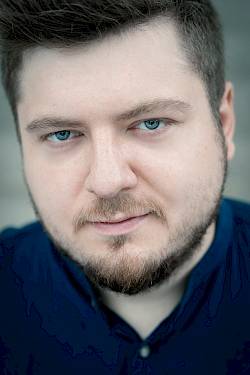 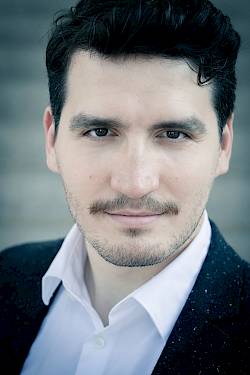